It’s pretty much a given these days that a Marvel movie is going to tick all the right boxes. Depending on your own personal tastes, they haven’t really made a shit film yet. Sure, I thought Captain America: The First Avenger was a poor effort and Iron Man was overrated, however they were by no means awful films. And as if to prove a point to me personally, they went and made Captain America: The Winter Soldier and Iron Man 3, which are among the best comic book movies I’ve ever seen. 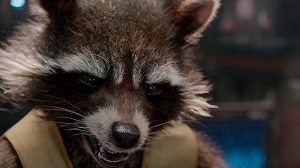 But Guardians of the Galaxy was always seen as a tough sell. Whilst Hollywood is now falling over itself to get space operas into production – as a consequence of a certain Episode VII that’s on the way, no doubt – you’ve got to remember that when Guardians was announced, it hadn’t been so long since the disappointments of Green Lantern and John Carter. The first of those two films spent as little time as possible off Earth, whilst the second had ‘of Mars’ stripped from its title before it was released. Despite not yet having a failure to their name, Marvel was taking a big risk.

Now that the film is upon us, I can confirm that they haven’t broken their record of making geek and general public-pleasing big budget movies. In terms of broad narrative brush strokes, The Avengers would have to be the most similar – we have a motley collection of peeps banding together to save the world. Erm. Galaxy. The difference is that Guardians doesn’t have five prequels preceding it. It has to introduce us to the characters and get on with the story as quickly as possible. In the hands of someone like Joss Whedon, this would be child’s play (see Serenity, which can easily be enjoyed without having first seen ‘Firefly’) but there aren’t many writer/directors like him.

James Gunn does an admirable job, and it’s not as if many are hoping for any sort of depth from more than the lead character (that would be Peter Quill (Chris Pratt) a human taken from Earth as a child to a galaxy far, far away) but if anyone can decipher any difference between Zoe Saldana’s bland trinity of sci-fi roles (Neytiri in Avatar, Uhura in Star Trek and Gamora here) then you’re more observant than this writer. That’s not to cast aspersions on her abilities – she does a fine job in all three films – but she hasn’t had much to work with in any of them.

With this film, the supporting characters are the most enjoyable. Bradley Cooper’s Rocket Raccoon is wonderful, Dave Bautista continues to show he has good comedic timing (as he did in Riddick) and Vin Diesel (via a team of visual effects artists) steals the show as Groot.

The story, concerning the infinity stones (a couple of which we’ve already seen in the Marvel Cinematic Universe) isn’t anything to write home about. 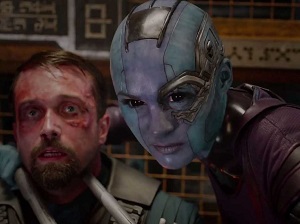 The world in which these characters inhabit is a wondrous sight to behold, however it’s often too detailed. More than once I was overwhelmed by the clutter filling the screen.

This is a problem when it comes to the action scenes, which are frequently difficult to follow. After the brilliant (and brilliantly shot and choreographed) action scenes from The Winter Soldier, it’s disappointing to see that Guardians drops the ball in this regard. It’s pretty, oh yes, and the visual effects look great, though they have a tendency to detract from the action.

As an outer space action adventure with broad appeal, Guardians of the Galaxy hits all the right notes. It feels a bit like Avengers-lite, however, insofar as the humour is less punchy and the surprises are few and far between. Perhaps suffering under the weight of too many characters, this is a comic book property that’s sure to get better with sequels.

Guardians of the Galaxy