Two thousand and fourteen is turning out to be a bumper year for Australian films, both in terms of quantity and variety. I’ve already covered The Rover, The Babadook, Canopy, Tracks and Wolf Creek 2. Now comes These Final Hours, a film that I’ve been hearing about for what seems years but was finally released on 31 July. 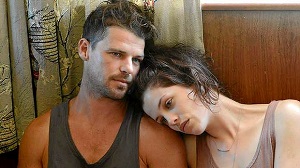 A movie set on the eve of the Apocalypse, These Final Hours follows James (Nathan Phillips), a man who is trying to make the most of the end of the world but can’t quite seem to decide what to do. As society crumbles, he’s travelling to be with his girlfriend at the party to end all parties. As you would imagine, the world’s turned in a pretty bleak place. Everyone’s killing themselves, killing others or doing whatever they can to numb the horror they feel as zero hour approaches. The film presents us with a very flawed James at the outset, and it’s clear that we’re going to be seeing some kind of path to redemption. That feeling only increases when he stumbles upon young Rose (a wonderful Angourie Rice), who’s been separated from her father.

To be honest, there aren’t many surprises in These Final Hours, but it’s a strong film nonetheless. If, like myself, you’ve seen movies like Perfect Sense or even Deep Impact, then the similarities may irk you.

Phillips does a solid job as James, but it feels like there’s something missing in those early scenes. A montage of sorts, it makes it difficult to home in on the character, and as a consequence he comes off as a bit of a meathead. In his scenes with Rice, however, his performance shines, and the movie is at its best when they’re sharing the screen.

His interactions with other people have varying results. The film can be tonally inconsistent, so that some scenes come off a weird hybrid of funny and/or awkward. This may have been on purpose, but such moments feel like they were supposed to be taken seriously.

Though the apocalypse depicted here must have been reasonably cheap to create as far as cinematic end of the world goes, the stifling atmosphere comes across perfectly. It really feels like the world is burning, and civilisation is going down the toilet. The visual effects are used sparingly and to great effect.

These Final Hours has a lot to recommend, and I certainly enjoyed it more than The Rover. Though it’s at times inconsistent, the significant emotional moments really hit home.

←Blue Ruin Guardians of the Galaxy→