I wasn’t a fan of the first Captain America. In fact, for me, it was the worst of the Marvel films. So imagine my surprise when The Winter Soldier turned out to be an excellent movie indeed. 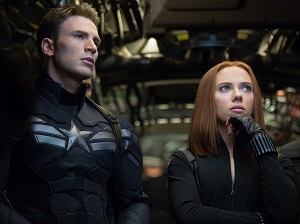 Chris Evans returns to play the ultimate fish out of water. Steve Rogers is decidedly old-school, and the modern world is still a bit of mystery to him. S.H.I.E.L.D. is starting to move in directions that make him uncomfortable, and he’s not sure just who he should be fighting for. It’s no coincidence that Captain America’s weapon is a shield, something that is usually used in defence. When his employers seem increasingly invested in pre-emptive strikes, he feels the need to pull back.

To say much more would be to spoil some of the surprises in The Winter Soldier. I’ve avoided every single trailer for the film, even though arguably the most obvious mystery – that pertaining to the title – is something I discovered a couple of years ago through geek osmosis. Anthony and Joe Russo’s film has been touted as a throwback to 70s conspiracy thrillers, and whilst some of these genre comparisons in the Marvel cinematic universe seem to be drawing a long bow, there are some elements of truth to the description.

To aid in this comparison, we get Robert Redford joining the cast as Alexander Pierce. He’s been having a bit of a career resurgence of late (as we saw with The Company You Keep and All is Lost), and he’s in top form here. Anthony Mackie is great as ex-soldier Sam Wilson too, and manages to ground the more fantastical moments. There are a dozen actors that we’ve seen in earlier Marvel films making their reappearance, whilst the screenplay affords Scarlett Johansson’s Natasha Romanov her biggest Marvel role yet. Black Widow’s been one of the most charismatic characters in these films, and The Winter Soldier gives us a tiny glimpse behind her façade. All we need now is a solo Black Widow film to be announced with Joss Whedon directing.

The film features half a dozen action scenes that are truly thrilling, and possibly the best of all the Marvel films so far. Some annoying shaky-cam rears its ugly head (really? I thought we were over this…) but despite this, I was never less than thrilled.

It’s the story that really maintained my attention throughout, and it’s easy to see that what happens here is going to have huge ramifications for everyone’s favourite this-ought-to-be-much-better-than-it-is-TV-show, ‘Agents of S.H.I.E.L.D.’ A nod to the real world Operation Paperclip never goes astray, and there are enough references to Nazis and the Second World War to make this feel like a true sequel to The First Avenger.

Whilst Thor: The Dark World was entertaining but also rather forgettable, The Winter Soldier really knocks it out of the park. I haven’t quite decided if it’s better than Iron Man 3, but it certainly impresses. If you’re a fan of the MCU, then this shouldn’t disappoint.