Iron Man is apparently the first of ten comic book adaptations self-financed by Marvel Entertainment, in an effort to actually see more of the ridiculous amounts of money generated by their superhero films. This, along with rumours that we will see increasing amounts of crossovers in their films, suggests a more strategic attack on Hollywood by a whole host of spandex-clad folk. As far as I can tell, the new plan is to make movies the way they make comics – more titles, with more characters and increasingly tangled plots.

Of course, Iron Man is one of the few superheroes not to be clad in spandex. This immediately makes the film look less silly. The suit, and in fact the special effects throughout Iron Man are pretty good. Until the climax of course, which is traditionally when special effects gurus’ dreams exceed their reach.

The first films in franchises are often the hardest to make (and let’s not kid ourselves – Marvel have a franchise in mind). Having to fit both an origin story, some sort of nemesis and closure within two hours is a pretty hard task. Iron Man succeeds with the first part. Tony Stark (Robert Downey Jr.) is wonderfully introduced. A billionaire engineer and head of a huge weapons manufacturing corporation, he’s basically a bit of a tosser. But a tosser we all like, cos he skips over all the bullshit, cracks jokes, and basically has fun with his station in life. This changes when he finds himself facing the consequences of creating weapons of mass destruction. Of course, the film takes the safe route, making no real assertions about war or the weapons we use to fight them. There are still bad guys and good guys and no grey areas whatsoever. It’s just that now he realises that people actually use these things, and that they kill people.

This spoiled potential aside, the first two thirds of the film are greatly entertaining. The quality starts to slip as we move into the final act. There’s simply no excuse for comic book movies these days; I know I go on about Batman Begins every chance I get, but it really did show that these films could be so much more. More pertinently, Unbreakable already told us the rules, so any time a film complies with those classical elements, it’s bound to disappoint. The last third of the film edges dangerously into Fantastic Four territory – big explosions, overdone CGI, and a complete lack of excitement.

Another problem is that all the creative writing seemed to go into Stark’s character, as the others are little more than sketches. It seems like ages since I’ve seen Gwyneth Paltrow in a film, and she’s charming and eminently likeable here, even if she exists only to round out Stark. Terrence Howard and Jeff Bridges are completely wasted in barely sketched caricatures. Director Jon Favreau et. al. have gone halfway to creating a great superhero movie, it’s just such a pity they drop the ball in the final act. All the good action is behind us by the time we reach the rather predictable showdown. If it weren’t for Downey Jr., this may have been a waste of time, but he makes the film feel a little bit more real.

It’s weird to think that Blade and X-Men reignited Marvel’s big screen success, yet every film afterwards has been a watered down, blunted adaptation oh-so-eager to keep the kids entertained, with little regard for older viewers. Iron Man is easily better than the worst of them, but could have been great.

Batman Begins and Spider-Man 2 have stood out in recent years as comic book adaptations that really work on the screen and Iron Man can now be added to that (short) list, although its failure to acknowledge the pitfalls of unabashed patriotism means it can never be as highly regarded.

Robert Downey Jr. is Tony Stark, billionaire weapons developer and unmitigated genius without a conscience. When a trip to Afghanistan to demonstrate the capabilities of his new Jericho missile system to Air Force brass goes horribly wrong and he is captured by terrorists, Stark faces an awful choice: to build a Jericho missile for his captors as per their demands (which may then be used against fellow Americans) or die at their hands. 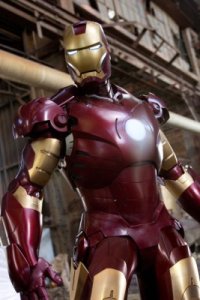 Genius that he is, he realises a third choice exists and instead manages to escape in his new guise of Iron Man.

Iron Man builds momentum nicely throughout its first acts, introducing characters and settings with precision. Stark is obviously the focus and in the hands of Downey Jr. he is vividly brought to life. That Downey Jr. may be the greatest actor of his generation is widely accepted and Iron Man enhances his claim – truly, the man can play anything. Terrence Howard, Jeff Bridges and Gwyneth Paltrow all appear in supporting roles, but none is given much breathing space to develop their character beyond standard comic book archetypes.

The only true weakness is actually borne of its origins – the assumption that love for the Good Ol’ US of A is a worthy element of one’s personality. Iron Man sets up Stark to take a fall but when he is confronted by the effects of his (and his company’s) actions he resorts to typical flag-waving patriotism rather than really thinking about the issue, and is portrayed as righteous in doing so. Instead of questioning whether arms development is a good idea in the first place, he eventually settles on seeking out every last one of his company’s weapons that are in non-American hands. Heaven help us all if this is the best a true genius could come up with when so personally confronted with the ravages of war.

It isn’t just Stark who is crippled in this way – the script itself sets up one character as the demonstrable evildoer responsible for the distribution of weapons to America’s enemies, and in doing so neglects to examine the issue of American complicity in arms purchasing and distribution over the years. If the script didn’t pose at examining the dilemma through the reactions of Stark it would not need to be held to such a high standard, but by indulging in pretense it asks its audience to judge it on this among many merits.

Iron Man is an exciting and visually accomplished action film with a lead performance that is far better than standard for the genre and a fine comic touch (again mainly due to the skill of its star). Its failure to allow Stark to really examine his actions in any context other than that of patriotism, however, means it suffers from being unnecessarily one-dimensional – critics of films like this one often point to the clearly defined good- and bad-guys with no shades of grey, while the best of the genre allow their characters to exist in more than a binary state. Unfortunately, as Stuart agrees above, Iron Man could have been so much more.