As if it weren’t clear enough that Netflix is actively courting late Gen Xers/early Millennials (see ‘Stranger Things’, ‘She-Ra and the Princesses of Power‘, ‘Carmen Sandiego‘, ‘Voltron: Legendary Defender’ and the upcoming ‘Masters of the Universe: Revelation’), they’ve gone and dragged the follow-up to 1982’s The Dark Crystal out of development hell. (Fun fact: up until 2012, it was being developed as a feature film in Melbourne by the Spierig Brothers!) 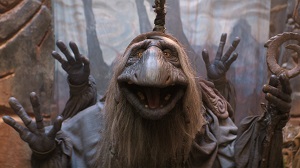 The original film is a curious beast. Supposedly beloved by many, I’ve yet to find anyone who genuinely enjoys Jim Henson’s film as an adult. Even as a child, I found it a slow, plodding affair that failed to excite any emotions. The puppetry was the only thing worth writing home about. Henson’s next film, Labyrinth, was an improvement in every single way.

So I’m damning Age of Resistance with faint praise when I say that it’s a marked improvement on the original film. A prequel, it shows the world of Thra under the benevolent dictatorship of the Skeksis. The various tribes of Gelflings pay tribute to their overlords, variously in a state of denial or blissful ignorance as to fact that they are being taken advantage of. Everything changes when one of the Skeksis discovers they have the ability to use the Dark Crystal to siphon life force from the Gelflings, and extend his own life. Meanwhile, a mysterious force known as the Darkening (seriously) is taking over Thra…

With an expansive cast of characters, Age of Resistance sees the individual story threads spread across Thra, then intersecting more and more frequently until it all comes together at the end. If you’re fascinated by fantasy world-building, then this show has it in spades. The different landscapes, flora and fauna, various tribes and races – there’s a lot to take in, and I don’t remember the last time I watched a TV show that paid this much attention to the setting.

I should make clear that Age of Resistance has wonderful production values. The score is bold and uplifting, even if the main theme sounds distractingly reminiscent of Tears for Fears’ ‘Everybody Wants to Rule the World’. 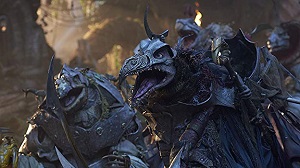 The physical sets are incredible, and the costuming is stunning. When it comes to the puppets themselves, however, I’m on the fence. I’m not a huge fan of rubbery-looking puppets, so the Gelflings themselves are unimpressive. Then there’s the fact that the puppeteers aren’t providing the actual voices. Now, I mightn’t have noticed this if Brose Avard (head honcho of the Chatflix podcast) hadn’t mentioned it, but as with the original film, the voices are replaced by other actors’, which means that the physical ‘performances’ aren’t as impressive as they could be. Put simply, ‘Sesame Street’ puts on a better puppet show.

The voice cast is…overwhelming. Taron Egerton, Anya Taylor-Joy, Jason Isaacs, Simon Pegg, Benedict Wong, Mark Hamill, Keegan-Michael Key, Awkwafina, Eddie Izzard, Helena Bonham Carter, Lena Headey…I have to stop, because the list goes on. It’s basically a who’s who of actors from fantasy and sci-fi productions of the last 20 years. Also, could we take a moment to note that Simon Pegg has appeared in reboots of Star Trek, Star Wars, Tintin, The Chronicles of Narnia, ‘Doctor Who’ and now this? Are there any iconic geek properties from his childhood left for him to take part in?

Age of Resistance is a love letter to the original, but thankfully much more entertaining. I wasn’t exactly enthralled, and was regularly conscious of scenes or plot points that only served to pad out the episodes, but perhaps that’s because I’m aware that this is yet another example of a proposed film being changed to a TV series by Netflix (see also ‘Stranger Things’ Season 1). The potential for more big budget puppetry on streaming networks does get me excited, however. I’m glad that the art can still get the big budget treatment in 2019.

The Dark Crystal: Age of Resistance is available now on Netflix.

The Dark Crystal: Age of Resistance