Rarely will one relish their time at the cinema as much as when seeing Knives Out, a wonderfully enjoyable romp from writer/director Rian Johnson (Star Wars: The Last Jedi, Brick).

After the discovery of the lifeless body of family patriarch Harlan Thrombey, his family come together at his gothic mansion to understand what could have lead to his murder. Old resentments resurface and the reading of his will escalates matters even further. Meanwhile, a mysterious private detective is investigating… something. 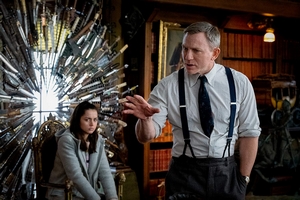 At a time when remakes and sequels are de rigueur and we’ve all slogged through 23 movies in the Marvel Cinematic Universe alone, an original movie that is as fun and enthralling as Knives Out can lead to a form of ecstasy. This is the kind of film that so rarely sees the light of day any more, and it is so much more valuable for that. Knives Out is a reminder of what great cinema can and should be: a surprising laugh; a tragic mistake; a thrilling discovery.

And yet, Knives Out still needs to earn its stripes and it does so with aplomb. Paying homage to Agatha Christie while remaining stridently modern, the film is a hard one to encapsulate in a single genre. Is it a straight-out comedy? Not quite, but there are moments to make you laugh out loud, especially in seeing Captain America shed his lycra. A simple murder-mystery? Not exactly, but it certainly features many of the tropes of the oeuvre. There are elements of the caper; there are even some moments that shoot for political commentary although don’t let that put you off.

Marta Cabrera: I’ve never been to a will reading before.
Benoit Blanc: Think of it as a tax return by a community theater.

The entire cast seems to be loving their experience, although Chris Evans and Daniel Craig appear to particularly enjoy playing at variance to their most recent well-known characters. Craig is a revelation as private detective Benoit Blanc, a southern gentleman for whom the respect of the police detectives hints at an intriguing backstory. Johnson leaves questions about Blanc’s history unanswered, a decision that allows the film to feel deeper and more grounded. It must have been tempting to tell more of his story but thank goodness he resisted the urge. 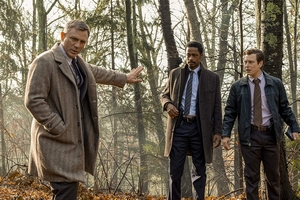 Ana de Armas and Evans round out the leading roles, and de Armas is excellent in her part as the only one who really seems to care about Harlan’s death. Don Johnson, Jamie Lee Curtis, Michael Shannon, Toni Collette, Christopher Plummer, LaKeith Stanfield and Katherine Langford fill out an incredible leading cast. Unfortunately, a running joke about Jaeden Martell’s Jacob falls flat while Riki Lindhome’s Donna is wasted entirely and might have been excised to encourage focus.

The film moves along fairly briskly, although with a couple of brief edits to its 2h10m running time it would have been close to perfect. As released, the occasional redundancy keeps it short of that (high) mark.

Knives Out is a wonderful film and a must-see for film-lovers. This is the kind of filmmaking I wish audiences would encourage more with our box office money, rather than handing over yet more cash for yet another superhero money-maker. Please, go along and pay full-price: it’s the only way we can tell the accountants in Hollywood what we think is important.

←Charlie's Angels In the Tall Grass→