I’m a huge fan of this franchise, and one of apparently only a few people who likes both Pitch Black and The Chronicles of Riddick. Now that we have a third entry in this increasingly confusingly named series, I can safely say that it’s one of my favourite sci-fi franchises. I think part of this simply comes from the fact that this isn’t Star Wars, Star Trek or a James Cameron-esque space marines-type sci-fi world; it has its own clear identity. 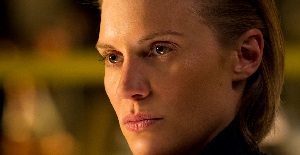 After the incredible ending to the second film, it was almost inevitable that writing their way out of those events were going to be lame. And I have to admit, this aspect of Riddick doesn’t impress. But all you need to know is that he’s now on death’s door, marooned on a sun-drenched planet. Of course, this isn’t enough to stop Richard B. Riddick (presumably ‘Dick’ to his friends, right before he garrottes them), who is determined to find a way off the rock.

The first 25 minutes of the film feature Riddick on his own, and this is simple cinematic storytelling at its best. With practically no dialogue, it reminds me of the first section of WALL-E. It’s when other characters step into the frame that the tone shifts, which helps prevent the narrative from getting stale.

To say that Riddick is more like Pitch Black than The Chronicles of Riddick would be pretty accurate. We have a desolate planet, some nasty alien critters, a ragtag bunch of mercenaries, and of course Vin Diesel playing the antihero of the piece. His dramatic arc mightn’t be as strong as in the first film (and to be honest, it never really made sense that he stayed such a bad-ass after the events of Pitch Black), but Diesel is excellent in what is apparently his favourite role. He has a great supporting cast also, with the likes of Matt Nable, Dave Bautista, Bokeem Woodbine and Katee Sackoff playing thugs who actually look like they’d give everyone’s favourite space-faring murderer a run for his money. (Sidenote: Why oh why hasn’t Sackoff got a lead role in a big budget action movie yet?)

The budget is noticeably smaller this time around, after the squillions that were thrown around in Chronicles, but it’s rarely a problem. The CGI creatures look fantastic, as does the alien planet, however the less said about the hover bikes, the better. Graeme Revell’s score is excellent also, echoing the main theme from Pitch Black without overusing it.

David Twohy’s script is good, as always (if you haven’t seen it, you really should check out A Perfect Getaway), and there are a couple of truly classic scenes here, one of which is a masterpiece of tension-building. The film does feel a little slow in parts, and some of the arguing amongst the characters could have been excised. Also, whilst I enjoyed the frequent changes of gear, some may find this too much of a hodgepodge.

For me, however, Riddick was another great addition to this lesser-known franchise. Having also played ‘Escape from Butcher Bay,’ I know that Diesel’s character has a lot more mileage in him, and I hope to see him on the big screen again one day.