I went into the cinema to see this one with very low expectations. Since cinematic judgments move at the speed of light in 2019, Charlie’s Angels had already been declared a critical and financial failure within the first weekend. Imagine my surprise when the film…turned out to be pretty fun? 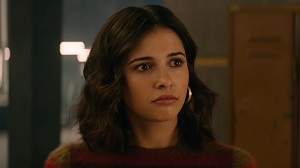 Surprisingly, this newest version isn’t actually a reboot – it acknowledges that which came before, all under the premise that there are now many, many Angels and Bosworths all over the world. (You know, that thing Ghost Corps was going to do until…well, we know what happened there.)

Kristen Stewart, Naomi Scott and Ella Balinska play lead roles this time around, and they’re having a great time. Their performances spark off each other, and all three have oodles of charisma to spread around. The worst that can be said is that they clearly get along well – even when the film suggests they shouldn’t. The bickering is too friendly in the early stages, which takes away from the inevitable mutual respect that we all know will surface by the time the credits role.

Bosworth is played by Elizabeth Banks, who’s a triple threat here, having also written and directed the film. And the writing is interesting. Some have criticised the film for being stuck in turn-of-the-millennium girl power, but to me that feels unfair. The film is clearly feminist, the difference here being the inclusion of an incredible list of micro-aggressions that women have to face in their everyday lives. But at the same time, we’ve got a trio of women who are, of course, stunning in the most traditional of ways. For obvious reasons, I am not the right person to be suggesting how a 2019 Charlie’s Angels should approach feminism, but it’s clear that the concessions made mean the themes don’t land as well as they could.

The action is fun – and I mean really fun. The editing is a mixture of great and rotten, and there are some dodgy gravity-defying moments that make no sense, but the film has such a brisk pace that this isn’t a problem. Comparing the action to the likes of Mission: Impossible – Fallout, is simply unfair, because, well, nothing can compete with that film. At first I wondered if a gritty approach may have been more successful (considering we’re in a post-Bourne world where Daniel Craig’s Bond still struggles to find the fun), but then Kingsman did all right as a silly action-comedy five years ago.

So put this down as one of those pleasant surprises. If the responses online have put you off, consider giving Charlie’s Angels a go. It’s fast-paced, fun entertainment with some great action sequences. And if you need another reason, Kristen Stewart is hilarious as Sabrina, getting some of the funniest lines in the film.

←The Dark Crystal: Age of Resistance Knives Out→