Joss Whedon’s television show ‘Firefly’ lasted just one season before being ripped untimely from Fox’s womb – not before securing a legion of fans, however, further entranced by the imagination of the man who brought the world Buffy the Vampire Slayer. Eagerly awaited by the army of ‘Browncoats’, Serenity is sure to satisfy both them and the uninitiated. Mal, Wash, Zoe, Jayne and the rest of the crew live aboard their Firefly-class space ‘boat’ in a future we are never told how far away. This is the first of many conventions Whedon breaks throughout the film, and maybe this is why Serenity feels so fresh. There are moments when he is forced to conform to the science fiction guidebook, and yet these are vastly outweighed by the number of times he takes something we ‘know’ and turns it on its head. I lost count of the occasions I was surprised by something happening onscreen, a rare experience for someone who sees so many films – by pulling back from the brink at times when we’re sure he’ll cross over, and going further when we think he’ll stop, his film becomes a constantly pleasurable surprise.

Whedon’s direction is just as convincing – his handling of the multiple transitions that occur in the first few minutes is beautiful. We are introduced to the world of these outcasts so rapidly, and the story gets underway so cleanly, one can’t help but be sucked in right from the start. I was immediately entranced by the way he jumps from one piece of exposition to the next, never leaving the audience behind, and yet surrounding them with this world and its problems.

The comic touch which by reputation is artfully displayed throughout the ‘Buffy’ tv series (which I barely watched), is again used to full force here – there are moments of outright laughter, and others of wry smirking. Much of Whedon’s humour comes from pointing out absurdities in the world around his characters, and his forthright scripting is a real strength. The fact that his words come from how a real person would react in these circumstances makes them ring so true to someone so jaded by the way most Hollywood characters always say just the right thing.

The cast are top-notch, and put to shame some of the big names that have appeared in major blockbusters this US Summer Silly Season – Tom Cruise in War of the Worlds can’t hold a candle to Nathan Fillion in Serenity. Fillion is a charming leading man, with wit and charisma to burn, and yet a stare that inspires respect. Gina Torres, Alan Tudyk, Summer Glau – all of the ensemble, really – all are great, perfectly picked for these characters. It seems a shame now that only fourteen episodes of this series were made for television, as it seems likely ‘Firefly’ could have grown legs on the basis of its characters and their portrayal of the realities of this world – if only it had been allowed time to do so.

The most enjoyable aspect for me was Whedon’s use of language. Always his calling card, we again are immersed in a dialogue carrying varying tones, from the Wild West, to Chinese curses, to the use of words in a sense incorrect for that of the surrounding sentence. Much as J.R.R. Tolkien fashioned a real world out of his love for language, Whedon has developed a frontier town feel and placed it in a science fiction setting, and it works in spades. The ‘space western’ never looked so good, and I can’t imagine this being topped.

At 119 minutes, I was surprised by how quickly the time went, and never felt any let-up in the action or the pace of story-telling. This film is the shortest two hours I’ve spent in some time. Filled with excitement, action, laughter and insight, Serenity is the joyful blockbuster experience I’ve been awaiting all year.

This will not be a level headed and objective review. You have been warned.

I have long worshipped at the temple of Joss, and I’m glad to say that his latest creation, Serenity, is no disappointment. This is a film full of the usual Whedon antics – inventive action, an hilariously witty and tight script and a constant urge to subvert our expectations. Whedon revels in tempting clichés and then spitting in their faces. 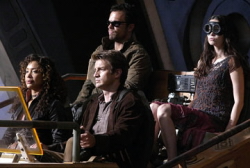 Serenity has a great cast, and fans of ‘Angel’ will recognise more than a few faces. Mal and his motley crew are a wonderfully varied bunch, and creating interesting collectives has been Whedon’s trademark from Toy Story to ‘Buffy’ to Alien Resurrection. It’s great to have a film filled with (comparatively) unfamiliar faces. One can easily get bored with the revolving list of Hollywood household names, and when you finally see a film starring strangers it’s tantamount to a revelation. Sure, actors like Adam Baldwin (no relation) have been around for a long time (he was in Full Metal Jacket for crying out loud), but on the whole Serenity boasts a fantastic array of fresh faces. Chiwetel Ejiofor (Melinda and Melinda) in particular stands out in an unusually graceful and honourable villain.

There was never a dull moment in this film for me, and the first fifteen minutes alone were stunning. The opening scenes were so perfectly fast paced and effective in a way very few science fiction movies are.

And speaking of science fiction, there’s one very important point I wish to make here. In Serenity, it’s silent in space. Holey moley! No-one does that. No filmmaker would be mad enough to try (apart from Kubrick). Sure, it’s covered up with music much of the time, but it’s great to see a sci-fi flick that doesn’t annoy in the way that most do. The overall tone shares a lot with frontier westerns, and there’s a bit of rebellion here, but thankfully it never becomes at all Star Trekky.

It’s interesting to note that Whedon was unhappy with the way the original 1992 feature Buffy the Vampire Slayer turned out, so he made ‘Buffy’ the TV show. Then in 2002 his fledgling show ‘Firefly’ was axed before it had even learned to walk*, so he made it into a movie. He has played the game well over the years, always intent on putting his stories out there.

If you’re a fan of Whedon’s TV shows it would be near impossible to dislike Serenity. Most importantly, this isn’t a rehash of ‘Buffy’. It may feature a young, diminutive and deadly female, but it never slips lazily into familiar territory.

←The Dukes of Hazzard The Proposition→