For those most familiar with Chadwick Boseman from his starring role as T’Challa in the surprise 2018 mega-hit Black Panther, it might be fascinating to see him appear in this police thriller as a New York City detective who isn’t averse to pushing both the boundaries and the spirit of the law. Sadly, 21 Bridges holds little of the charm or originality of his breakout performance. 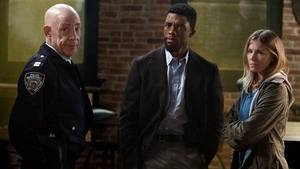 Boseman is introduced as Andre Davis, a grieving son at the funeral of his slain NYC police officer father. His righteous fury at his father’s death is presumably intended to make us sympathetic to his subsequent acts as a police detective. When a drug heist goes wrong and several police officers are shot and killed, Andre is asked to lead a manhunt to capture their killers.

Drawing from a long line of police thrillers that have come before it, 21 Bridges is formulaic filmmaking at its finest. Of course, Andre can’t trust anyone around him, including his partner. Of course, the good guys become indistinguishable from the bad, and Andre can only rely on himself. Of course, Andre is redeemed for his sins by the end of the film. Would that it were all not so predictable.

Andre is partnered by Sienna Miller’s Frankie Burns, and they share precious little chemistry. New York is shot as a dark and foreboding place – hardly the city that never sleeps of repute – and the characters are similarly lacklustre. Burns has a little girl she mentions at one point in a vain attempt to give her some depth, while Andre still visits his ailing mother. None of this information adds to the audience’s understanding of their motivations or actions. 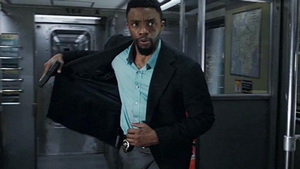 The only performance that is remotely interesting is Stephan James’ turn as Michael. Here is someone who communicates the urgency of his situation, and who the audience can understand and perhaps even feel sympathetic toward. J.K. Simmons phones in his performance and the remaining cast are noteworthy only for their injuries: oh, there’s the fingers-missing guy! Hey, there’s the one with no eye.

At only 99 minutes, 21 Bridges is an outlier given the trend to long-form filmmaking and the inability of modern directors to tell their stories efficiently. I’d love to say the film doesn’t feel bloated but it really drags at stages.

21 Bridges is more miss than hit and is unlikely to satisfy fans of crime thrillers or action/adventure films. One can only hope Jonah Hill doesn’t feel inspired to create the ultimate 21 Jump Street Bridges crossover.

←In the Tall Grass 6 Underground→