James Cameron ends his 12 year feature film drought with Avatar; a film that proves that the $200 million spent on Titanic was simply spare change. (The rumour is that this film cost half a billion dollars, though in true Spider-Man 3 fashion the studio is unlikely to let on exactly how much was spent on marketing.)

Cameron has returned to the genre he loves (science fiction) and the colour he can’t seem to live without (blue). Quite simply, it’s the tale of marine Jake Sully who is posted on the planet Pandora – a world humanity has just begun to plunder for its natural resources. Pandora, of course, has its own indigenous population and for some selfish reason they don’t wish to give up their way of life just so that we humans can go on using up and spitting out planets. Before long, Jake comes to realise how he despises his race and essentially ‘goes native’ (the film could quite accurately be called Dances with Dragons).

Avatar is one of the most visually stunning films you’ll ever see. The world of Pandora is easily the most fully realised alien world to ever grace the big screen. I’m trying to think of comparisons and all that come to mind are those hideous CGI messes dreamed up by George Lucas in his Star Wars prequels. Pandora is a living, breathing place and despite the fact that the flora and fauna look, quite frankly, ridiculous it all works. This is a case of money well spent. I’m pretty sure that the majority of the exteriors are CGI, though some of the forest scenes look so good that it’s hard to tell.

I remember thinking that the special effects of Titanic looked pretty bad even back in 1997, whereas it’s hard to find fault with Avatar. The alien humanoids are clearly designed with the limitations of CGI in mind – they have their hair tied back in a pony tail, they’re so skinny as to not have any body fat or um

Given that, at the time of writing this review, the worldwide box office for Avatar is more than US$1 billion, it may be redundant to criticise its obvious and many flaws, although many other critics have been quick to do so. What seems certain, however, is that James Cameron has produced a stunning visual experience of an alien world, which (as Stuart mentions) has probably never before been matched.

When Jake Sully (Sam Worthington) arrives on Pandora to replace his dead brother, he brings the usual macho cowboy attitude of a former US marine – he seems to support fully the idea of a private human company raping the beautiful environment of another planet, irrespective of the harm that could do to the ecosystem and its humanoid inhabitants, the Na’vi. 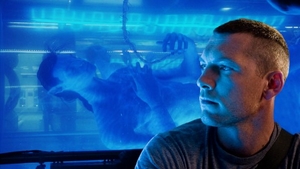 An unexpected romance with a native makes him question and eventually change his entire world view, leading him to rebel against the evil corporation that employs him.

If the plot description I’ve given sounds utterly banal, then it has truly represented the film as intended. It seems bizarre that a film project that (reportedly) has been sixteen years in the making and (again, reportedly) is the most expensive in history could be allowed to get to release without someone pointing out how truly ridiculous and uninspired its plot is. As our colleague Stephen Rowley has pointed out, Avatar shares many features and characters with Cameron’s earlier film Aliens. Other echoes of science fiction abound, but it isn’t only in the larger scale that Avatar seems derivative: there are particular scenes that stand out in which Cameron obviously thinks his audience is either stupid or has never seen a film before. The ‘mechanics’ are too frequently on display, such that when certain events happen one can tell that those events will repeat themselves later with Jake.

The performances in Avatar are secondary, with the emphasis on visual spectacle over character in all but one instance: Worthington’s Jake achieves an acceptable and believable metamorphosis from marine grunt to Na’vi leader. Around him, however, are characters that are either underdeveloped (Grace, Selfridge, Spellman) or completely one-dimensional (Colonel Quaritch). Michelle Rodriguez appears to enjoy herself, although she seems unlikely ever to play the lead in a romcom, so definitively has she become typecast.

The visual effects in Avatar are, for the most part, absolutely stunning, and for many viewers this will be the defining characteristic of a highly enjoyable film. Flora and fauna on Pandora seem utterly believable, and Jake gets to walk, run and shoot his way through some incredible landscapes. The overriding sensation in viewing the film is of wanting to visit this amazing planet, and in this respect Cameron has delivered everything he promised and more. 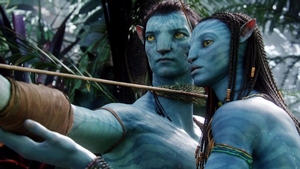 Unfortunately, one early animated chase sequence suffers from rapid-fire editing and faux-‘shaky cam’, such that the audience can understand and interpret very little of what is happening on screen. One wonders why Cameron would deliberately choose to make his first great action sequence unwatchable.

Avatar seems intended to serve as allegory, and in this respect it is a blunt hammer indeed. When combined with a script that appears to have been knocked out in hours and then ignored while concentrating on the pretty pictures, the unfortunate effect is detrimental to Cameron’s incredible achievement in bringing Pandora to life. I would be more than happy to sit through a three-hour ‘documentary’ about the flora and fauna of this imagined world, however Cameron’s script makes Avatar less appealing.

If one could allow the bright colours and intriguing movements to stimulate one’s retinas without requiring any higher brain involvement, Avatar would be an extremely enjoyable film that would lead its genre in terms of effects and integration of real-life performance with animation. For many, however, the by-the-numbers plotting and characterisation will disappoint.