I haven’t seen any of James Cameron’s previous underwater documentaries, and thus Deepsea Challenge 3D is the first time I’ve dipped my toe into his non-fiction pool, so to speak. This film – which feels like it should be classified as an Australian coproduction but which IMDb claims otherwise – sees the intrepid writer/director/explorer dropping to the bottom of the Mariana Trench in a cramped, one man sphere. 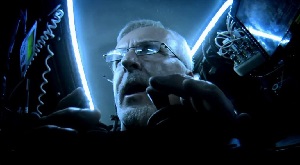 Unfortunately, for those of us still waiting for a cinematic adaptation of Steve Alten’s ‘Meg: A Novel of Deep Terror’, he doesn’t discover a megalodon lurking in the depths (belated spoiler warning! Sort of!) Instead, the focus of the documentary is the race against the clock to get their bathysphere ready in time for the small expedition window available to them.

As with the efforts that went into the production of The Abyss, Cameron’s work here involves facilitating the invention of stuff that’s never been invented before. Along with his team of engineers and deep sea divers (whom, frustratingly, we never learn enough about) he’s working to break records and bring back samples from the ocean floor for scientific study. The documentary is narrated by Cameron, and there’s more than a little bit of self-aggrandisement. He comes across as a watery Howard Hughes, splitting his time between adventures such as these and filmmaking. (That the Avatar sequels will be partly set underwater is hardly surprising.)

As an exciting documentary, the film is decisively middling. The thing about deep ocean trenches is that they don’t harbour much in the way of interesting scenery. And there’s not much to spot on the way down, either, since the submersible’s sinking like a stone with nothing but the plankton speeding by to provide an indication of movement.

The 3D aspect of the film varies greatly. The high quality stuff that was shot specifically for the documentary is rather neat, but the post production conversions are as unimpressive as you’d expect. There’s not much you can do with the behind the scenes footage shot during the production of 1989’s The Abyss, after all (for the record, this writer’s favourite James Cameron film.)

All this isn’t to say that the film isn’t enjoyable. It moves briskly through its 1.5 hour running time and never gets boring. The sheer audacity of the project is successfully portrayed and, despite that general feeling that he would not be a fun person to work beneath, Cameron makes for an interesting subject.

Deepsea Challenge 3D is released in Australia on 21 August 2014.

←Guardians of the Galaxy Robotics;Notes Collection 1→