The stupidly prolific François Ozon returns with Young & Beautiful, a film with a synopsis that sounds like every French film ever made. After losing her virginity whilst on a family holiday, 17 year Isabelle (Marine Vacth) slips into prostitution. All of her clients are rich, older men, and she forms a bond with one in particular, Georges (Johan Leysen). 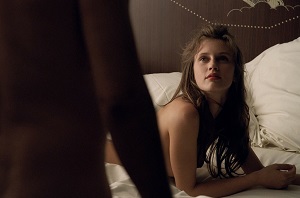 Thankfully, despite how it sounds, Young & Beautiful isn’t as pervy as it could have been. Sure, we see a lot of naked Isabelle and very little of her naked clients, but the film doesn’t lose focus and trip into erotica. That being said, Ozon’s script is fairly bare-bones. Being spoon-fed character motivations is one thing, but this film goes out of its way to not explain a lot of things, the first of which is why Isabella does what she does. Sure, there are hints here and there, but despite the incredulity of some around her, we’re never given access to her thoughts on the matter.

Young & Beautiful is a film about a taciturn outsider, and thus lives and dies on the actress’ ability to give a mostly wordless performance. Vacth puts in a strong, naturalistic turn and is charismatic enough to be the focus of the film, even if there’s a certain lack of depth provided by the script. It must be said that although Ozon’s strike rate with me is generally 50/50 (I loved Swimming Pool yet loathed Under the Sand), he’s always a good director, and he gets excellent work out of the entire cast.

Whilst I sound unimpressed with this film, it’s nowhere near the likes of Adoration, which presented us with an almost completely unbelievable scenario with no good reason. Young & Beautiful is dealing with something that of course happens in the real world every day, even if the path Isabelle takes to get there isn’t very common. It throws up some suggestions as to Isabelle’s motivations, though it provides no real answers. The depiction of prostitution isn’t glamorised as such, but it does feel a bit idealised. The point is made, however, that teenagers in a similar situation would normally be exposing themselves to manifold dangers.

Young & Beautiful walks a fine line without becoming offensive or too idealised, however it doesn’t leave a lasting impression. Vacth is a fine actress, and the film is technically very well made, but I would have preferred a deeper narrative.

Young & Beautiful opens in Australia on Thursday 1 May 2014.

←Captain America: The Winter Soldier The Amazing Spider-Man 2: The Rise of Electro→