I hired this only because Swimming Pool was such a fantastic film. There was nothing about the publicity, reviews or word-of-mouth that had attracted me to this film. I should have paid attention to this fact. 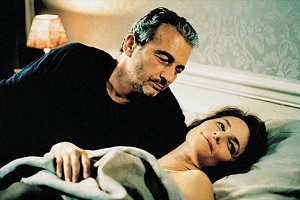 Under the Sand is dull. I didn’t feel for the characters and didn’t find the story particularly interesting (although it was somewhat predictable). The film even looks ugly. There’s nothing colourful at all in Under the Sand, but it isn’t bland in a cool, washed out kind of way, it’s simply dull… nearly on par with Dead Creatures. Even the opening credits were bland (and red – a big no no in my world because my DVD player isn’t exactly top-notch… the colour bleeds all over the place).

Charlotte Rampling was great in Swimming Pool, and in that film at least her character had some substance. In Under the Sand she wanders around in a zombie-like fashion (again, like Dead Creatures!), and whilst this may be realistic considering the situation, it doesn’t make for interesting cinema.

I only got excited in this film when they played a Portishead song… but it didn’t even last until the vocals. I couldn’t wait for this film to end.