Potentially one of the most controversial Australian films in recent years, Adoration is an adaptation of a Doris Lessing novella. If you aren’t familiar with Lessing – who unfortunately passed away just a few weeks ago – a quick read of her Wikipedia entry will give you an idea of the volume and variation of her work. As a neat juxtaposition, now let me very quickly summarise the plot (NSFW) of Adoration. 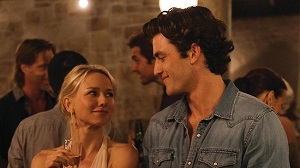 That’s right: this is the kind of film that must walk a very fine line. One slight misstep and you’re sailing towards outright offensiveness or unintentional hilarity. Naomi Watts and Robin Wright are cast as the two mothers, Lil and Roz, whilst Xavier Samuel and James Frecheville are their respect sons, Ian and Tom. Lil and Roz are lifelong friends and neighbours, and couldn’t imagine living anywhere else, or apart from each other, for that matter. That seems sweet until they then pursue sexual relationships with each other’s adult sons.

Some online have raised the point that, if the genders were reversed, this film wouldn’t have been made. Perhaps, but that’s probably because the much older man/younger woman pairing has been done to death in cinema. This is a much rarer premise, and one I think is worth exploring, but only if the filmmakers have something interesting to say.

For me, the main problem with Adoration is it doesn’t explore one very crucial issue: the love Lil and Roz have for each other. Is their love for their respective sons actually masking their real desire? The suggestion is raised more than once, but never really goes anywhere. Instead we have a fairly basic narrative that simply ponders the question of ‘what if’ and takes it to its logical conclusion. Forbidden love is a decent enough concept for a feature film, but if we’re not told why it’s happening in the first place, it merely comes off as scandalous for the sake of selling tickets.

The strength of the performances can’t be denied, however there are easily a dozen moments in Adoration that simply don’t work. This is a good-looking film that ticks along at a brisk pace, but feels more like a raunchy limerick than a poetic tale of forbidden love.

←Thor: The Dark World How I Live Now→