I realise I mightn’t be the best judge, considering I’ll watch just about anything in the ‘thriller’ section of the video store, but Swimming Pool is really on the top of the thriller heap.

François Ozon has crafted a superbly subtle film, a thriller that has its share of twists and turns, but doesn’t announce them too brazenly. Such narrative twists unveil themselves slowly and without much fanfare, and Swimming Pool is all the more disturbing for this. 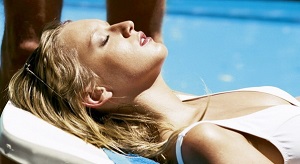 Charlotte Rampling gives a wonderful performance as the uptight, repressed and sometimes downright rude English woman. Ludivine Sagnier similarly plays with the French stereotype – carefree and… let’s face it, naked. The two work together well, and the supporting players – although fairly two dimensional – do well also. Charles Dance seems to have aged a good twenty years in the past ten – weird, he didn’t look old at all in Alien³ (but then I suppose he was bald in that film).

For someone like me who has consumed thrillers by the bucket load, it’s a breath of fresh air to see a film that first of all takes the time to lay down the dramatic groundwork for the characters, never in a hurry to thrill too early.

If I’d have realised that this was from the writer and director of 8 Women (8 Femmes), I probably wouldn’t have hired it. That camp pseudo thriller comedy left me very unimpressed – especially when they burst into song. (They were definitely actors, not singers.) Thankfully Swimming Pool is nothing like that, except for the presence of Ludivine Sagnier who thankfully has more to do than she did in Peter Pan.

I highly recommend this intelligent and sophisticated thriller that rarely puts a foot wrong.