As much as WB/DC are given flack for chasing after the MCU’s success, you have to admit that Captain America: Civil War was announced in the wake of Batman v Superman‘s announcement, suggesting that, just like their publishing arms, the two comic book companies survive by nicking ideas from each other. I’d also argue that MCU is never quite as pre-planned as it appears to be (for example, see the start/stop formation of the Avengers or Thanos taking his sweet time to get off of his damn space chair). That being said, the Marvel films are certainly more consistent in terms of quality. And Civil War continues that trend, even if it can’t compete with the likes of Iron Man 3 or The Winter Soldier. 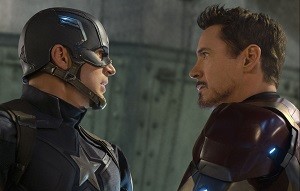 The chickens are coming home to roost for the Avengers, and after several superhero smack-downs in public places, the populace are getting fed up with the collateral damage. The governments of the world then step in, demanding that the Avengers are made answerable to a UN committee. Not all our heroes are convinced this is a good idea. Thus, a division forms, one that threatens to change the Avengers forever.

You may have already guessed this by my summation of the plot, but this is really an Avengers movie rather than a Captain America one. In fact, Cap is regularly absent. In his place we have the majority of the Avengers getting scenes, not to mention setting up further MCU films. Batman v Superman had its ridiculous “Wonder Woman watches teaser trailers on YouTube moment” but Civil War grinds to a halt for 10 minutes so that it can introduce Spider-Man mark III.

All this is only an issue if you were looking forward to a movie full of Chris Evans. Geeks who’ve been watching all of the MCU films and TV shows up till this point won’t be bothered, even if the casual viewers might be struggling to keep up.

The fact is that this is a reasonably well-written movie. The motivations for the Avengers’ division are clear, even if they’re not as convincing as they should be. But there are one or two moments of dire plotting, in particular with regard to the type of retconning that fails to tug at our heartstrings because it’s clearly been dreamt up for this movie, even if its reverberations should be felt all through MCU history. (Wow, lookit me trying to keep this spoiler-free.)

The action is wonderfully handled and has some great moments. There are, however, too many instances of shaky-cam, and I’m also getting a bit sick of fights all taking place in bland concrete or asphalt environments. 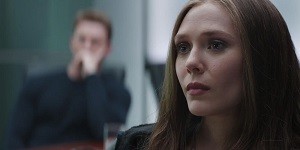 What happened to epic fights in exciting locations? I don’t want Revenge of the Sith-type absurdity, but something other than “they fight in a concrete bunker/a freeway/an empty airstrip” would be appreciated.

The other problem I have is that the Winter Soldier is present and accounted for, and once again I have to endure this charisma vacuum for minutes at a time. I haven’t seen Sebastian Stan in anything else, but he’s always bloody boring in the MCU films.

The Russo brothers have crafted a breezy action film that’s easy to enjoy, even if nothing much lingers after the credits roll. It has its fair share of fun moments, and the fact that the 2.5 hours don’t feel like a marathon is to their credit. It’s not up there with the best of Marvel’s output, nor does it feature the exhilarating highs or awful lows of Dawn of Justice. It’s another accomplished Marvel film, the kind that didn’t exactly disappoint, but certainly leaves me hoping that Doctor Strange will show us something we haven’t seen before…