To tell you the truth I’m a little nervous.

This is the first time I’ve been called upon to actually write about a Star Wars film, and I’m concerned that I’m going to upset people. I’ve always stated that the Star Wars prequels exist outside the normal movie world, that they can’t be compared with ‘proper’ films because of the enormous mythology that each feature is tapping into. They are part of an undying phenomena, rather than simply movies. That being said, now is the time to look at Episode III critically – there’s no escaping for me now…

So how does Star Wars: Episode III – Revenge of the Sith stand up against the standard quality movie release? Not too well…

Let’s face it – the script is atrocious. The words that tumble out of these (usually fantastic) actors mouths are often embarrassingly silly. And it doesn’t seem to matter how good the actor is, they all seem to have the same stilted delivery as they fumble with these unnatural sentences. Ian McDiarmid did the best job coping with the dialogue. Throughout the last three films Palpatine has staid fast as one of the best realised characters. The rest of the actors – justifiably – can’t deal with the substandard script. It’s hard to believe that we saw Hayden Christensen and Natalie Portman deliver fantastic performances in Shattered Glass and Closer respectively – here they are reduced to stunted caricatures. If you thought that the love story of Episode II was pissweak, well, it’s worse here. Scene after scene between Anakin and Padmé fails, and every now and again Lucas gives us a random shot of the latter crying, possibly in the hopes that we get the point. Of particular disappointment is Anakin Skywalker’s induction to evil. Sure, the bare bone motivations are there, but it ends up being like a switch flicked on (think The Simpsons with the killer Krusty doll ‘here’s your trouble, you had the thing set to evil!’). The film is thankfully as dark and evil as promised, and there are a couple of chilling scenes. There is very little humour here and the fatalistic sense of foreboding is undeniable.

With such a bad script, the best parts of the film are when no one actually speaks. Here is where we see the true genius at work – John Williams. He is in top form in Episode III, and essentially a retroactive director. There are a couple of quiet moments where even the action calms down and Lucas simply lets the music do the work, and these instances of retrospection tell the story much better than any of the words do. The most powerful moments in this film are effective only thanks to the work of Williams.

The action scenes are also masterfully handled. Lucas certainly knows how to shoot these moments. Interestingly enough, the lightsabre fights aren’t as exciting as in the previous two films. This is because, first of all, we know the outcome in most cases, but in Episode III the fights are more about spectacle than physical and acrobatic prowess. These are BIG action set pieces, and often the lightsabres are little more than flashing lights in the distance. In terms of actual sword fighting technique, they never come close to the battles at the end of episodes I and II.

It must be said that the special effects are great (although the green screen still sucks – watch Enduring Love for the perfect green screen). Since the release of The Phantom Menace we have gradually become more accustomed to entirely digital worlds – and ILM is surely the leader of the pack when it comes to CG creatures. The opening shot of the film is incredible, and I imagine comes close to the ‘wow’ factor when audiences first saw that blockade runner fly over in 1977.

There are very few dull moments in The Revenge of the Sith, and the 140 minute running time actually whizzed by. This is, without a doubt, the best of the prequels, although I wish it hadn’t taken Lucas so long to get only so far. Surely if he’d passed the script writing or even directing duties onto others we would have seen a film that was spectacular and a stunning piece of cinema…

So… is it exciting? Yes. Is it a stunning fantasy, full of beautifully realised worlds and exotic creatures? Yes. Is it everything the fans had hoped for? Yes. But is it a great film? Probably not…

Like Stuart, I am a little nervous writing this review… for years I have failed to understand the hype about the original Star Wars trilogy, and I’ve resented the fuss about Ep’s I & II, given they were such terrible films. So, coming into Episode III, with all the ‘finally Lucas has given the fans the dark story they always wanted’ reviews and the massive media campaign, I was starting to hold out a little hope I may even enjoy it…

Unfortunately, Revenge of the Sith continues on many of Lucas’ sins from The Phantom Menace and Attack of the Clones, and commits more of its own. This is an incredibly disappointing movie, and a tragic end to the Star Wars screen saga.

The problems begin with Lucas’ script. The dialogue in this film is awful – “It could be a trap” says the perspicacious Senator. No shit it’s a trap, you dumb-ass! The film is littered with inanities like this, that can only irritate anyone with even half a brain. There is so much over-statement, and over-explanation, even my most hopeless mates, who can never follow movie plots, would be bored. The language is simple and immature, and yet Lucas takes so long to actually get anything out. Bizarre. 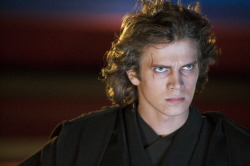 Next is the direction. This film is at least thirty minutes too long. I could easily re-cut this film to about 100-110 minutes, without losing the spirit or the necessary plot points, and the film would be vastly better for it. Do we really need to see every little CGI image your ILM guys dreamed up? They work for you, George, you’re their boss, so you don’t owe them anything. Choose what goes in and what goes out, don’t just show off!

The acting is at times unbearable – Christensen is terrible as Anakin/Darth Vader, taking his role to new lows after the abysmal AoTC. Yes, I agree with Stuart that he was hampered by an appalling script, but there’s just no excuse for the wooden performance he gives. Portman is missing in action for much of this film, but when actually seen, is allowed only to meaningfully cry, or beg to be hugged. She fails to be convincing even with this limited range required of her. McGregor is passable as Kenobi, McDiarmid is NOT as great as everyone is saying he is, and what was with Samuel L. Jackson??

The musical interlude about halfway through, seemingly what Stuart is referring to above as a redeeming feature of this tripe, is in fact annoying at best, and downright incongruous at worst. Why Lucas felt we needed a video clip at this point I have no idea, but it added nothing to the story, other than another few minutes.

The CGI, from the much admired Industrial Light & Magic, is patchy. Some of the fight scenes are well shot, but much of the space battles are a mess of glitchy CG and poorly animated aliens and robots. Don’t even get me started on General Grievous. When is Hollywood going to learn that the dream of a fully CG film is never going to occur? The millions of dollars spent on these rubbish sequences would have been vastly better spent on a team of scriptwriters and some editors.

The only thing I did like about this film, is the use of the parallel storytelling in the second half. Using Yoda vs Darth Sidious interspersed with Kenobi vs Skywalker was a nice touch, and the death vs birth imagery also worked. That said, that the only thing I liked about this film was a technique of editing is an indictment on it in general.

I long for the day when people start to wake up to themselves, and really analyse these films for their true worth, instead of considering them ‘outside the normal movie world’ as Stuart described it. This is pretentious, self-indulgent film-making at its worst… the real value of the three prequels is almost zero.