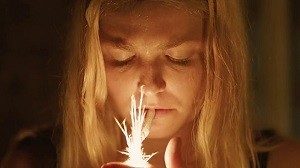 Set during the 2003 New York blackout, the film sees Able’s Kate alone in her loft apartment whilst her partner is away for the weekend. She and Leah (Alexandra Breckenridge) left on bad terms, and now she only has her troubled thoughts, fears and self-loathing to keep her company. Safe to say the addition of a city-wide blackout doesn’t help matters much.

The film has much more in common with Polanski’s Repulsion than any kind of traditional thriller. Unfortunately, most of the marketing for the film seems to hint at the latter, so I can only imagine people looking for a nifty little “person in peril” story will be disappointed. A series of vignettes illustrating Kate’s disconnect from the world around her, and a lack of tangible external threat, means that we’re stuck watching a woman go slowly mad.

Able, who was in Monsters with her now-husband, Scoot McNairy, can certainly lead a film on her own. She absolutely nails the binary representation of anger and fragility. But at the end of the day, it feels like Kate is simply bumming around the house with little purpose. Realistic, to be sure, but not particularly interesting.

There are several sequences that feel like they’ve come out of a more traditional thriller. Kate navigating the apartment building with nothing but a torch edges towards scary, whilst one particular confrontation with another character is eerily realistic, as Kate is unsure whether to treat them as a threat or simply weird.

The production values are decent, whilst the unsettling soundtrack works half of the time. If you come to Dark wanting to see an extended character study in self-loathing, then the film may appeal. Don’t expect a fun enclosed-space thriller, however.