The Divergent series continues to get worse with the penultimate installment, Allegiant. 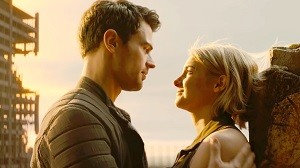 I don’t know what it is with the filmmakers involved, but they seem to be intent on taking away all the things that were good about Tris in Divergent. That first film was extremely derivative, but at its core had a great central character (and performance) featuring a young woman whose tenacity and dedication led to her triumphing in the end. Insurgent then took away some of what made her great by saying she effectively had “magic DNA”, so her determination in the first one counted for nothing. Allegiant goes one step further, by actually making her an idiot. It’s hard to believe, after two films featuring lying and manipulative adults, that she’d suddenly believe the next one she comes across, even if it is everyone’s favourite news anchor from ‘The Newsroom.’

Discovering that life in Chicago post-revolution isn’t much better than life pre-revolution, Tris and her pals decide to make a break for it and see what’s outside the wall. (This is what the final scene in Divergent hinted at, but instead we got stuck with more running around the city in the second film, but that’s beside the point.) There, they discover another type of civilisation, one that holds the key to the future of mankind. And it all seems grand, except for the fact that -surprise, surprise – the people in charge are lying and manipulative adults.

And as the series’ box office performance decreases, and the budgets increase, you have to wonder if splitting this last book into two was a good idea. Where Divergent was chock full of science fiction clichés, Allegiant is spread rather thin across the two hours. What’s more, the screenplay demands a lot more VFX, and the budget isn’t really up to it.

The presence of Jeff Daniels doesn’t help the film, nor does usual brilliance of Woodley. She’s absent for much of the action, and when we do see her she’s usually standing in a room, talking to Daniels. Joseph Trapanese’s score is more memorable than his work on the previous entry, but alas it still doesn’t come close to the brilliance of Junkie XL’s work on the first film.

It’s such a pity the franchise has fallen so far. I was an ardent (and rare, it seems) supporter of the first film, but there’s very little to recommend here. I’ll see Ascendant when it arrives, but only out of a misguided and stubborn determination to see the franchise to its end.