I think the following quote will tell you what to expect from Tremors 3: “Hah! Ass blaster! Blast your own damn ass!”

Yep, that’s right folks…it’s time to grab your remote control cars and put on your sneakers (for sneaking), cos them darn graboids are back. And this time it’s personal! …Well, not really.

Why are the (badly named – blame number 2 for that) graboids so interesting? Why do we keep coming back for more? Well, similar creatures have featured in other films, so apparently there is some sort of obsession going on. From Dune (the book and film/s) to the pit of the Sarlacc in Return Of The Jedi to that huge fish in Waterworld, the concept of a huge toothy maw rising out of the earth is just so damn cool. 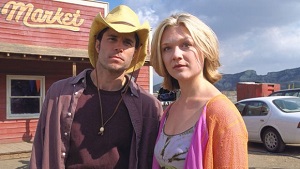 Tremors 2: Aftershocks made it into my all-time worst sequels list, so it was only after a recommendation from a friend that I decided to delve into giant carnivorous worm territory again. My friend was right, Tremors 3 is far superior to the second one. The main problem with Aftershocks was that the writers were stupid enough to change the creatures. If it ain’t broke, don’t fix it. And if you carelessly go ahead and fix it anyway, at least replace the graboids with something cool – not the lame cgi dinosaur type things. Unfortunately number three doesn’t ignore number two, but it does it’s best to sidestep the bad ideas put forth in the first sequel.

Michael Gross is back (imagine, from Family Ties to this!) and on the whole Tremors 3 is a lot of fun. It gets bonus points for the extended climax which features people doing their best to use the items around them as weapons (see my Welcome To The Jungle review for more on this), and the film doesn’t overstay its welcome.

Ariana Richards from Jurassic Park is in this film. Unfortunately she doesn’t do much, but there seems to be an entire scene that’s a homage to the Spielberg picture – I’m not sure if that was clever of them or just plain lazy. Hopefully she’s got a better career ahead of her. It worked for Drew Barrymore, so here’s hoping…

I enjoyed it. It’s crappy but then again it’s about BIG THINGS WITH TEETH, and this very intelligent and discerning filmgoer is easily distracted by things like that.
By the way Tremors 4 just came out…and it’s a prequel! I can’t wait…

Tremors 3: Back to Perfection