There’s been a recent surge in the availability of Asian cinema in our local video stores here in Melbourne. As a consequence I’ve been lapping up many of the (mostly Japanese) films on offer. Volcano High hails from South Korea and is quite possibly the first South Korean film I’ve ever seen. 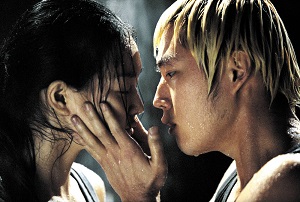 This movie’s crazy. It’s loud, in your face, and never, ever subtle. The plot itself seems to be rather gratuitous… we’re all waiting for the fights… and basically that’s all this film’s got going for it. The characters are well defined only by their hair (kudos to the hair stylist… I’ve never seen so many different hair styles in one film), and spend most of their time perfecting their wild takes. Although I must say it features a couple of the coolest strong female action heroes this side of The Matrix or Crouching Tiger, Hidden Dragon. The story is best described as ‘something about a something or other before bad stuff happened’. That’s about as concise as I can be. Basically I was bored shitless in between the action scenes.

The actual quality of the picture and sound on the VHS copy I had was poor. I’m not sure if it’s the fault of the distributor, or if the film would have been the same in the cinema. The dialogue was barely audible yet as soon as they got their action thang on, the music was ridiculously loud. The washed-out look of the film didn’t seem to quite work either, it just looked like they’d used really crappy film stock.

Okay, so… the action. Volcano High seemed like a film made by action movie buffs, not actual film makers. The fight scenes are full of cool moments, but they never seem to flow well. Sure, they do some cool stuff with water, but overall the action scenes are a bit of a mess.

I should mention that I got the feeling that the subtitled translation was poor. Often I felt that the English wasn’t doing any justice to the original Korean. Nevertheless, this film fails on most points. Basically I would recommend watching the trailer… it’s got all the good bits and you won’t have to sit around in boredom waiting for people to start hitting each other.

By the way, you know when a character starts talking about mastering the ancient art of ‘brain wave lightning’ that you’re in for a quality presentation.