To say that I was less than convinced by good reviews of this film would be an understatement. But come on! Surely anyone who’d seen The Scorpion King would have been sceptical at The Rock’s second chance at a lead role?

I was pleasantly surprised, however, to find that Welcome To The Jungle is actually quite a decent film. 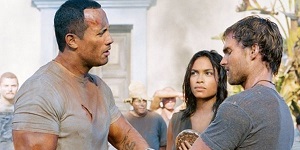 It’s a while since I’ve seen some solid action scenes, and WTTJ definitely delivers. It has some great wirework, and the fights have their own distinct visual style, which is great. You can also really feel the thuds as The Rock gets bounced around – he’s a big man and they certainly take advantage of that. The action scenes are inventive also, and the film also pays attention to the logic that I often go on and on about. That is: in a fight you would use anything around you to survive. Who gives a crap about whether or not the clip is empty? Take a look around the room you’re in now… if you had to fight to save your life, what would you use? Would you look for a gun? Hell, no! You’d use the chair, the lamp, the table, anything you could get your hands on and beat someone around the head with. Dog Soldiers was a fantastic film for this reason. When they run out of bullets they use whatever they can find – even cutlery. Welcome To The Jungle subscribes to this theory also (at least until the climax, which I found quite disappointing.)

The Rock is quite a good actor, but that’s no surprise given his day job. Seann William Scott is good also, still having to pretend that he’s not a huge muscle-bound hulk of a man (honestly, he’s so big… he looked ridiculously out of place in American Pie: The Wedding). Christopher Walken is Christopher Walken… good as always, and, as always… pausing mid sentence… for no… particular reason.

Even the humour works (except for a stupid scene with a monkey – why do American films have a fascination with animals copulating? In this particular film it’s definitely not funny, it’s puerile and stupid.)

Now I have to take a moment to turn my attention to the atrocious accents in WTTJ. Couldn’t they have spent some of the budget on a dialect coach? It’s ridiculous – Rosario Dawson’s attempt at a Portuguese accent is terrible! And don’t get me started on Ewen Bremner’s crazy Irish/Scottish blend (what’s his excuse? Isn’t he from the same landmass?) I can only think that the filmmakers wanted the accents to be over the top rather than accurate, but it certainly pissed me off (and is much, much worse than the Aussie accents in Mission: Impossible 2.)

Welcome To The Jungle is good, solid action fare that only failed to entertain in the last fifteen minutes or so. I’m actually looking forward to Dwayne’s next movie.

Welcome to the Jungle