Although Crumb was made long time ago now, there seems to have been a recent trend in adapting independent comics to film. American Splendor is very reminiscent of Ghost World, both in character archetypes and the graphics of the comic itself. 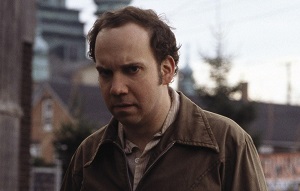 This film attempts slightly more than Ghost World, however, as the comic itself was autobiographical. The real Harvey Pekar appears constantly throughout the film, as do his real life family and friends. Paul Giamatti has the job of portraying the fictional Harvey, and delivers a brilliant performance, managing to catch not only the obvious quirks but the more subtle nuances of the real life Harvey. Giamatti is a top notch actor, and was just as fantastic in the less ambitious but highly entertaining Big Fat Liar. Hope Davis is similarly great as his long suffering partner.

Whilst it has a fairly slow start, American Splendor is a beautiful film. The love shared between the two leads may be hard to see at first, but it is there if you know where to look. This is a wonderfully subtle romance, and it’s easy to get tricked into thinking that they don’t care for each other. American Splendor is similar to Ghost World in that it focuses on a person who is simply out of synch with the world around him. There is something in his wiring that causes him to have difficulty acting ‘normal’. But this doesn’t mean that he is any less capable of producing extraordinarily works (in the form of comics) that intelligently observe people’s every day eccentricities.

That being said, I didn’t enjoy the film that much. I was quite bored. I suppose one problem was that I didn’t particularly care for the characters that much. Here’s an example where the Hoopla Factor becomes extremely important in rating a film. American Splendor is a wonderfully touching film that manages to tackle issues and feelings in a manner that very few films can.