The opening scene of Wolf Creek 2 lets you know what kind of sequel this is going to be. From the get go, it seems we’re supposed to be rooting for jocular serial killer, Mick Taylor. This means that the Wolf Creek series has already crossed the line that franchises such as Friday the 13th made popular, where we don’t care about the characters and are only interested in watching them die. It’s a pity that Mclean chose to go in this direction, and indeed Wolf Creek 2 squanders several opportunities to stray outside the formula provided by the first film – opportunities that are ignored time and time again. 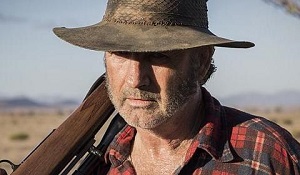 Thus, we have some backpackers (Shannon Ashlyn, Philippe Klaus) foolish enough to check out the Wolf Creek crater, unwittingly crossing paths with Mick. The only difference is that the film doesn’t waste any time letting us get to know the characters, or having Mick toy with them. One of the best scenes in the original film was the one where the luckless backpackers slowly realised that Mick wast more than simply eccentric. It was a brilliantly scripted, perfectly directed and subtly performed piece of cinema. You’ll find nothing like that here. Instead, Jarratt mugs at the camera and provides us with an ample number of potential catchphrases. Mick Taylor has gone directly from unique, menacing villain to the pantomime killer we’re all supposed to love. It’s like the Nightmare on Elm Street movies, except this transition has occurred much more quickly.

With all that considered, the film still has a number of great scenes. An increased budget has resulted in some gripping car chases, clearly inspired by Mad Max and/or Duel. The film also goes for laughs much more often than the original, and some of the gleefully black humour works quite well. Jarratt also gets a lot more dialogue, something which is both a boon and a curse. It takes away a lot of the menace that infused his performance in the first film, yet it does enable for some cracking dialogue.

Greg Mclean hasn’t done a full-on Tobe Hooper by initially resisting requests from studios to make a sequel before delivering a satirical pantomime à la The Texas Chainsaw Massacre 2, but Wolf Creek 2 has a distinctly different tone to the original. Basically, it feels like the kind of movie that Quentin Tarantino would love. Whilst the first Wolf Creek would be something he’d possibly write himself, this is something he’d enjoy as a viewer, keeping in mind that it was him who egged on Eli Roth to make Hostel.

The dénouement is where Wolf Creek 2 really drops the ball. For the most part, this is an over the top, gruesome horror flick with none of the ‘class’ of the original. It still has its moments, however.