A beautifully crafted and stunningly stylish debut, The Babadook is a film I really wanted to love. The story concerns single mother Amelia who is struggling to raise her young son, Robbie. His father died in a car accident before he was born, and his absence is still sorely felt years later. Robbie’s terrified of a monster lurking in his bedroom at night, and when a children’s book called The Babadook turns up, Amelia starts to share his fears. 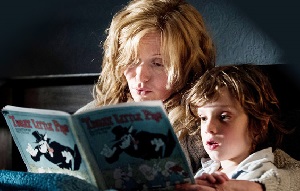 As a feature debut, writer/director Jennifer Kent’s film is masterfully constructed, and as a horror film, The Babadook hits all the right notes. The scary scenes are genuinely frightening – and happen to line up with the current haunted house trend we’ve seen in such films as Insidious and The Conjuring – and the cinematography, editing and lighting are all just perfect. Taking German expressionism and the likes of Nosferatu as a starting point, the film has a wonderfully old fashioned approach to the supernatural, so that we’re seeing in-camera effects, for the most part. Special mention should also be made of the sound design, which is brilliantly creepy. If you’re the type of person scared by the dark shadows that lurk in your house at night, then this film will terrify you.

The central performances are also fantastic. Essie Davis plays Amelia’s fragile mental state as if on a knife edge, whilst Noah Wiseman is one of those amazing child actors that makes everything look natural. You believe that they’re actually experiencing the same fear that we, as viewers are.

The main problem I had with The Babadook was a big one, however. From the outset, Amelia is at her wit’s end, distraught and overwhelmed. This means that script leaves her nowhere to go as the horrific elements begin to escalate. Whilst I could understand her actions and felt sorry for her predicament, I never sympathised with her. The same thing happened in the remake of Mirrors. In that film, Kiefer Sutherland’s character was reckless and at the end of his tether from the word go and this meant that whilst the story moved forward, his emotions were in stasis.

The problem lies with the script, though going by other responses online, it seems my opinion is in the minority. Everything else works perfectly – the film looks great, it’s nice and terrifying, and the subtext is clear without being rammed down our throats. It’s just that I didn’t feel for Amelia the way I think I should have. I’m sure that Kent will be whisked off to Hollywood quick smart, however, because this is one impressive debut.

←X-Men: Days of Future Past Under the Skin→