I wouldn’t be surprised if Mark doesn’t rush out to see this film, considering his history with Will Ferrell movies (see Talladega Nights: The Ballad of Ricky Bobby or Anchorman: The Legend of Ron Burgundy), but this film certainly wouldn’t be what he expected. In fact this film isn’t anything like Ferrell’s previous outings, and hardcore fans of his overwrought humour may be disappointed. 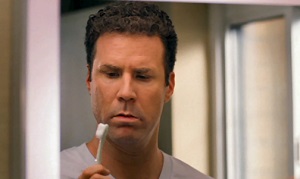 The trailer contains pretty much all the jokes from Stranger Than Fiction, though the rest of the film is surprisingly serious. Once we get past the premise (that IRS worker Harold Crick has a voice narrating his life) things get rather serious, but that’s not to say the film isn’t without charm. The ever-radiant Maggie Gyllenhaal (as baker Ana Pascal) is fantastic, and believe it or not a good counterpoint to the purposefully stilted Ferrell. The scene where Harold tries to engage Ana in conversation on the bus is pure brilliance. Dustin Hoffman has a great time as a literary professor roped in to try and solve Harold’s problem, though they’re careful never to put the five foot one Hoffman too close to the six foot three Ferrell. It’s great to see Emma Thompson back in the game as Harold’s narrator/author (I must admit I never got around to seeing Nanny McPhee, and the Harry Potter movies have so many stars these days you don’t have time to appreciate each one) and Queen Latifah is another comedic actress doing well at a serious role here.

The main reason why this film works is that it isn’t afraid to take its time. I can’t remember the last Hollywood film that relaxed and let a movie amble along at the rate of the performances. Usually we’re treated to one compressed scene after another in quick succession, but here the languid pace means that in some scenes we have time to truly relish the strong performances. Unfortunately this ‘technique’ or lack thereof is equal parts blessing and curse, as there are a couple of dud scenes that drag on too long.

The film never gets quite as cerebral as it would like to be, but there are some lovely discussions about the nature of fiction, particularly in the scenes with Hoffman. Part of the film’s charm is its self-effacing nature and willingness to point out the absurdity of certain plot elements. If nothing else it illustrates how multitalented director Marc Forster is, considering he also did Finding Neverland, Stay and Monster’s Ball.

This isn’t Eternal Sunshine of the Spotless Mind, but it’s a welcome addition to the Ferrell repertoire. He performs admirably as the socially inept Harold, and some of the film’s more tender moments find an utterly sincere Ferrell welling up with tears (though many of the audience did giggle). Overall this film is a nice surprise, though I can imagine it may disappoint ardent Ferrell fans and his presence may perhaps deter some who would love the film.

Stuart spoke about Stranger Than Fiction on episode 24 of the Chatflix Podcast.