This is an exceptional film. My early tip for favourite of 2004!

Wow, after hating Being John Malkovich and thus avoiding Adaptation, I really wasn’t primed for another shot at Kaufman. He’s made me a believer though, which I could never have predicted. This is a truly excellent film, with lots to say, multiple levels, subtlety, pathos, the lot. (Am I gushing yet?)

Carrey and Winslet form a wonderful couple, with one’s aggression matched by the others’ timidity, one’s reticence by the other’s disinhibition. In fact they match so well, it’s hard not to end up rooting for these guys to get it right. Gondry handles their relationship very well indeed, and I found myself hoping against hope and plot and malicious interference that they’d get it together in time. Not often have I wanted a screen couple to be together as much, maybe not since The Big Sleep.

The dexterity with which the memories and flashbacks are portrayed, and the use of special effects almost perfectly, mean that the dreamworld is as believable as the waking world, and the consequences of one on the other are always clear. This is no easy task, Carrey’s life being shown to us through multiple flashbacks and cut-scenes. Gondry has done an excellent job.

The minor characters are not perfect; Wilkinson, Elijah Wood, Kirsten Dunst and Mark Ruffalo having not much to work with. Wilkinson strikes the right notes as the doctor, however the subplots involving the abovementioned four actors are a little distracting. In fact, I was wondering why they were included, when the beauty of the principle relationship was clearly and rightly the focus. After the completion, though, I can see why, and understand the choices made by the writers. I guess I’m saying that, if like me you just wish they’d get back to Carrey and Winslet, wait and watch, and see how you feel at the end.

I have never liked Winslet before, not in the boat film, The Life of David Gale, Enigma or Quills. She is excellent in this film, and both Stu and I were in love with her by the end. I really wished I could meet someone like her, and she played her role with a touch that I found refreshing and alluring. Similarly, Carrey was very good, combining shyness, kindness and patience with frustration, sorrow and confusion, while never losing the viewer with moments out of character. Their combined performance at the beach house in the penultimate scene could be watched again and again. (As could their scene under the blankets).

There isn’t much wrong with this film. I guess I momentarily felt the wrong choice had been made toward the end, but having had time to think further, I realise that Kaufman and Gondry got it spot on. The message that staying in love takes work, and that no-one will be a perfect fit, is real and clear. The decision to accept anothers’ faults and love them anyway is a powerful one. Bravo.

Absolutely brilliant. Charlie Kaufman at his peak. Being John Malkovich and Adaptation were weird. But Eternal Sunshine of the Spotless Mind is weird and has something to say.

In fact I think you’ll find that I’m about to gush almost as much as Mark. Wow… two guys gushing… what sort of website is this? There are very few films out there that manage to examine the nature of long-term relationships in such a mature, intelligent and multi-layered manner. Anyone who has been in a long term relationship will be able relate to the issues encountered in Eternal Sunshine, and this is a sign of a great romance/drama film. Chasing Amy I think similarly succeeded in this realm also – almost everyone can relate to issues of jealousy regarding a partner’s past. Eternal Sunshine probes issues that I think many have pondered inwardly, with questions such as do relationships have a shelf-life, and if so, does the same apply to love? 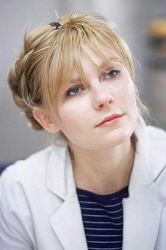 There is very little that disappointed me in this film. Yes, as Mark said, the supporting characters are kind of redundant. I was even disappointed with Kirsten Dunst’s character… and she has to work pretty darn hard to disappoint me (especially when she’s jumping around in her underwear).

But Carrey and Winslet truly shine. Carrey has already proven that he can quite capably handle himself in a straight dramatic role, but his performance in Eternal Sunshine is so incredible that you actually forget it’s him on screen (no mean feat considering how ridiculously over the top he usually is).

The cinematography is great, and they have made use of some amazing physical special effects (including some especially creepy moments), avoiding the use of digital effects whenever possible.

There is so much to absorb in this film. In fact I have already planned to go and see it a second time at the cinema.

I have trouble reviewing films that are simply fantastic. There’s not much to say when a film is close to perfect. Eternal Sunshine of the Spotless Mind is easily the best film of the year so far, and in fact threatened to creep into my top ten (until I beat it back with a particularly sharp stick… no film should be there after only one viewing.)

See it for yourself. This review is redundant.
Review by Stuart Wilson

Eternal Sunshine of the Spotless Mind