Frank Miller’s gotta be one of the most satisfied comic book writers in the industry. First Sin City and now 300 have been transferred to the big screen with unerring faithfulness, something with which most writers would be overjoyed. 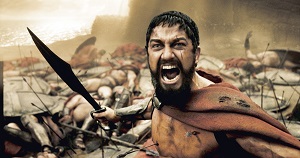 A retelling of the ancient tale of the 300 Spartans who stood against the Persians in 480 B.C., 300 takes more than a few creative liberties. Miller’s comic took the mythological retelling of such a story and simply made it literal. Thus the evil Xerxes is an unbelievably tall giant who has mutants and goat headed minstrels among his retinue, and the Spartans fly through the air impossibly in some sort of divine balletic carnage. It may be the most successful ‘swords and sandals’ movie ever released, but it’s really more of a fantasy. Everything is either fake or exaggerated, from the insanely muscled Spartans to the elephants they seem to have on loan from The Return of the King. It’s a gloriously beautiful and bloody spectacle, and as with Sin City it’s the imagery that is the focus of the film.

The actors all do sterling jobs, and David Wenham is particularly good as Dilios, the narrator of the tale. Gerard Butler in all his fearsome and bearded glory name drops Sparta and his Spartans probably more often than 007 ever uttered ‘Bond, James Bond’ in all 21 films, and Lena Heady has enough costume changes that it’s a little silly considering they all serve exactly the same function. Apart from her the (few) women in this film are reduced to sex objects, though to be fair there’s a whole lotta mostly naked men running around a lot of the time. It seems the Spartan extras were mainly cast on the strength of their abdominal muscles.

300 is not an overly complex film, and displays perhaps the same brutal simplicity of Sin City without the multi-narrative temporal shifts that made the latter appear to be complex. I have to rejoice at the continuing high-quality comic adaptations being developed, as well as an entry into the severely lacking ‘adult’ fantasy sub-genre of filmmaking. Zack Snyder, who helped make the studios a f*ckload of money, can now pretty much do anything he wants, and I’m thrilled to learn that he’s having a go at Alan Moore’s brilliant graphic novel ‘Watchman’, a film previously attached to Terry Gilliam and Darren Aronofsky.

300 is a thrilling film, admittedly without any particular depth. If you’re after spectacle on the silver screen, however, this is it.

If you’re expecting anything but mindless gore, you may be sorely dissatisfied after slogging your way through this overblown epic of style and no substance.

Based on the Frank Miller graphic novel of the same name, 300 is a curiously soulless retelling of the Battle of Thermopylae, complete with rampaging elephants and rhinos, giants, ogres and beasties, and yet lacking any real humanity for its audience to relate to. The 300 Spartans who will die so valiantly are presented as fighting machines lacking in the very thing they claim to represent and hold so dear… freedom. Enslaved by a culture of warriors, these men can give nothing of themselves, except eventually their deaths, and it all just feels so dry and unemotional.

Narrated by David Wenham as Dilios, in a bizarre mix of his Van Helsing and The Return of the King accents hardly befitting a great Greek storyteller, 300 is one long and dull fight sequence after another. 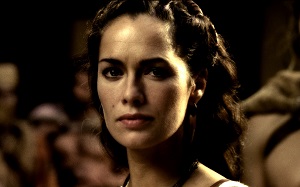 That it takes so much time to get to the first of the battles may leave many in the audience squirming in their seats, promised of blood and destruction as they were by the trailer. Gradually though, they may perhaps long for the quieter moments of the introductory scenes, as they provide the only sign of character development to be seen.

Gerard Butler certainly looks the part as the fearsome and (supposedly) inspirational King Leonidas, but is given so little information with which to infuse his character, what is seen on screen is but a shadow of a real man. Wenham, Lena Headey and Dominic West all battle a substandard script and minimalist plotting to deliver performances that are stereotypes of characters only. None gets enough material to make their character their own. West in particular suffers from being the prototypical traitor, whose actions are entirely predictable almost before sitting down with your popcorn, and Headey flies the flag as the only female character given no other task than to look pretty half-naked.

The film looks wonderful, and this is perhaps the only area in which director Zack Snyder has succeeded. The visual style is remarkable – the colours, costumes and cinematography (both real and CGI assisted) all form one glorious canvas for the comparatively disastrously bland story to unfold upon. Occasional moments of CG failure aside, 300 is a spectacular film to look at.

For anyone wanting to relax with a piece of substanceless action, 300 may fit the bill, but only if you truly seek nothing other than blood and decapitation. For those wishing for even the slightest piece of plot or character development, you may best look elsewhere.

←Stranger Than Fiction The Lives of Others→