Ryan Reynolds hasn’t had a good run when it comes to comic book adaptations. His first foray into the genre, Blade: Trinity, was an awful film, but at least he and Jessica Biel were the best things about it. Then came X-Men Origins: Wolverine and his attempt at Deadpool. Again, his performance was fine, but the film was rather dull. Then of course came Green Lantern, a movie I’d personally been waiting 20 years to see and which, as we all know, was less than successful. 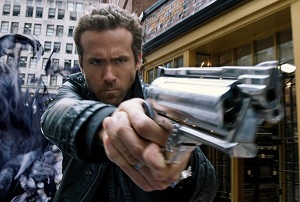 Here, Reynolds plays a recently deceased cop, Nick, who finds himself press ganged into the Rest In Peace Department, a law enforcement unit from beyond that deals in taking out the undead among us – those who’ve refused to move on to the next plane, and are instead hiding out as ordinary citizens. He’s partnered with Roy (Jeff Bridges), a lawman from the old west, who has his own peculiar methods and who – surprise, surprise – prefers to work alone.

Let me get to the single most important facet of this review: it’s only worth seeing R.I.P.D. for the performances. Nothing else about the film is particularly memorable, but it’s the central four actors that make it an enjoyable use of one and a half hours. Bridges is effectively doing his Rooster Coburn act from True Grit, and he and Reynolds have good chemistry. Kevin Bacon is having a grand ol’ time as regular Earth cop Hayes, whilst Mary Louise Parker constantly steals the show as Proctor, Nick and Roy’s superior at R.I.P.D.
The visual effects come thick and fast, and none of them are particularly convincing. All the creatures seem rubbery and there’s quite a bit of dodgy greenscreening going on. That said, it doesn’t really matter too much with a film like this. The action is filmed and edited with panache, and there are lots of shots that feel like comic book frames come to life. The filmmakers have opted for a Wile E. Coyote kind of slapstick, and it gets the job done.

To say that R.I.P.D is essentially Men in Black meets Ghostbusters wouldn’t be too far off the mark, however it displays nowhere near the same level of wit. The humour here was enough to make me smile but barely raised a chuckle. Nevertheless, it moves along at a brisk pace and, as I said, it’s the performances that make the film worthwhile.

Its predictable and somewhat shallow nature mightn’t be worth paying cinema prices for, but R.I.P.D. is worth a watch if you’re looking for something unchallenging to kill 97 minutes.