Possibly one of the most beautifully shot and edited film ever made, Chan-wook Park’s English language debut, Stoker, is a striking gothic thriller that nevertheless falls short of perfect. 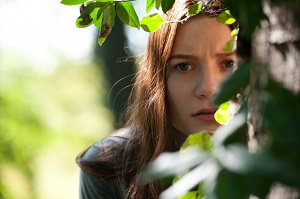 Oldboy remains one of the greatest revenge thrillers/unofficial ‘The Count of Monte Cristo’ remakes ever committed to film, and I’m sure you’ll all join me in trying to pretend that the upcoming American remake simply doesn’t deserve to exist. This means that you’d be crazy to pass up the chance to see a new Park movie, right? Written by Wentworth Miller (yes, THAT Wentworth Miller, of ‘Prison Break’ fame), Stoker is a disturbing psychological thriller of sorts that channels (intentionally or not) Hitchcock’s Shadow of a Doubt. After the death of Richard Stoker (Dermot Mulroney), Evelyn (Nicole Kidman) and India Stoker (Mia Wasikowska) are visited by his estranged brother, Charles (Matthew Goode). Enigmatic, suave yet with a hint of menace, Uncle Charlie (hence my reference to Shadow of a Doubt) holds sway over Evelyn in a way that India doesn’t like. Insinuating himself into the family unit, tensions begin to boil over.

Stoker should be used as a reference piece when attempting to create an evocative, haunting and alluring film. Every shot is incredible, and cinematographer Chung-hoon Chung constantly breaks all the rules – I lost number of the times that the camera ‘crossed the line’ – yet it all fits together like a vividly disconcerting puzzle. The sound design deserves special mention also, being a master class in dynamics and crossfading.

Wasikowska is fantastic. In fact, I can’t remember her ever disappointing, even going back as far as Suburban Mayhem. Kidman delivers a fine performance that unfortunately feels like a carbon copy of some of her earlier work – you know what I mean: all feminine poise and brittleness. Goode is the real revelation here, however. We’ve seen him play menacing before (in The Lookout, for instance), but here he manages the kind of debonair menace that’s reminiscent of Carey Grant in Suspicion, or Robert Walker in Strangers on a Train. Put this alongside his charming performance in Imagine Me & You and the difference is startling.

Stoker isn’t without the occasional predictable moment, however, and the thinking back over the film once its finished, you’re bound to be bothered by several rather large plot holes. The dénouement itself feels lacking also. Though arguably a case of style over substance, it cannot be denied that this is at the very least a brilliantly conceived and constructed piece of film making.