After loving Blade, and hating Blade II, I wasn’t certain about Blade: Trinity – would it capture the darkness and light of the original, or it would it be schlock? I can thankfully say, that although Trinity isn’t great, it is superior to the second.

Apparently Wesley Snipes didn’t enjoy making this film… I say that not having read any reviews or interviews, just based on his demeanour. If there was ever a less interested leading man, I can’t recall it. Why do it? Or why not just veto it? Stu and I were both a bit confused about why he let it go out, when he was so lazy and unmotivated in his performance. Jessica Biel struggles with her extremely limited role – she barely had anything to say, and her dramatic range was hardly tested. The one scene when she was allowed to show any emotion didn’t move me at all.

The only one of the three stars to emerge enhanced is Ryan Reynolds. How he got so buff is a topic for another day, but at least there was some life in his character. His screen time is really the only time this movie has any life. His banter with Parker Posey is the highlight of a pretty poorly scripted and directed film.

The lighting and camera work are all of the modern day, show-em-nothing style, which, as I’ve previously discussed, is something I don’t appreciate. What’s the point of making the characters so cool, and their actions so awesome, if we are struggling with vertigo?

Blade: Trinity is enjoyable for what it is, but is hardly ground-breaking. If you enjoyed the original, or like Vampire films, then maybe check this out. Otherwise, wait for DVD.

I agree with Mark – this is a very poor film. Although I should point out that I loved Blade II. Del Toro’s film was a fantastic sequel. Sure it didn’t have the style and finesse of the original, but it took us somewhere new and exciting. 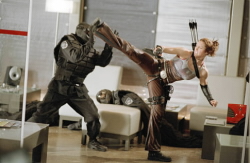 Blade: Trinity completely confounded me. How could this film be so bad, especially considering that we’ve had the same writer along for the ride? As a director, Goyer has done fine, but Blade: Trinity has such an incredibly poor script. It’s as if he simply ran out of ideas. The only aspect of this film that’s interesting and/or refreshing is Biel and Reynold’s characters. Biel (whilst not having too much to do) looks great as the action hero, and Reynold’s Hannibal King is great, providing the comic relief as well as some kick-arse action. Kris Kristofferson shouldn’t have been in Blade II, so it comes as little surprise to learn that he’s utterly gratuitous in this sequel. Parker Posey made a complete mess of her character, and it was weird seeing Natasha Lyonne in this movie. Her character seems out of place, never quite hitting the mark.

A big problem with Blade: Trinity is, well, basically… Blade isn’t in it. Wesley Snipes is in the film for what felt like ten minutes, and when he is present walks around in a zombie like fashion achieving absolutely nothing. I’m just as confounded as Mark as to what Snipes’ problem was. Surely he had the clout to change anything he didn’t like about the film? It’s not like he can afford to let his only truly successful character (read: franchise) fester away.

The other main criticism: the central plot was crap. It’s stupid to introduce police into the world of Blade at this stage, and then simply ignore them once they become inconvenient. Dominic Purcell as Drake was kinda weird, and it simply seemed like Goyer didn’t have any ideas left. Come on! Even ‘Buffy’ only toyed with Dracula in a solitary episode at the beginning of a series. If Whedon had left it to the end of a respected and popular series it would have failed miserably.

The action is fine in Blade: Trinity, excepting Snipes’ climactic fight which is lacklustre (like everything else about him in this film). This is truly one of the most disappointing sequels I have ever seen.