After Daybreakers failed to live up to its premise (or its trailer, really) the Spierig Brothers are back with their most accomplished film yet, Predestination. 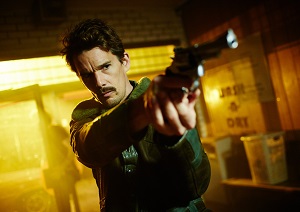 Ethan Hawke plays a temporal agent leaping back and forth through time to prevent the murder of thousands in a very Oroboros-type narrative. During one of his missions, he meets the real person behind the ‘Unmarried Mother’, the type of ‘real life’ column you see printed in ‘That’s Life’ and other such magazines. Following their respective stories, we realise that these two people are inextricably linked in this wonderfully befuddled time travel movie.

Based on the short story, ‘All You Zombies’, by Robert Heinlein, this is really the paradox to end all paradoxes. If the circular insanity of films like Primer and Looper did it for you, then you’re bound to be pleased with this film. One of the best parts of Presdestination, however, is the fact that the brothers Spierig have actually become strong directors. When it came to dialogue-heavy scenes, both Undead and Daybreakers lacked dramatic oomph, especially in the latter, despite working with seasoned veterans such as Sam Neill. In Predestination, however, the Spierigs excel in the role.

The best scenes in the entire film are those where Hawke and Snook are having a conversaton in a bar. Nothing fancy, just a good script, great actors and wonderful direction; these scenes are truly wonderful and the most exciting in terms of the Spierigs’ career trajectory. The complex narrative unfolding never loses sight of the drama. They’ve always been about B grade sensibility meets slick camera moves, stylish cinematography and inventive visuals, but here they’ve truly honed their craft.

Ethan Hawke gives a solid performance, but it’s Susan Snook that steals the show. Having been a fan since seeing her in Not Suitable For Children, I knew that she was bound for big things, but she is jawdroppingly awesome here, in what must have been a challenging, multifaceted role. I saw her a few weeks ago in These Final Hours also, but that small part wasn’t anything to write home about. I eagerly await her first headline role and just know she’s going to be TNBT.

There’s a definite Christopher Nolan influence here. There are lots of short scenes, with overlapping narration, and the film is quite dense. It’s a satisfying take on the type of time travel conundrum we’ve seen before, but rarely with as much flair.