It seems a long time since the Spierig brothers burst onto the scene with their zombie schlock-fest Undead, but their return indicates they’ve spent the time wisely – Daybreakers is a vastly superior film.

Set in a world that has seen the vampire race outnumber and almost overwhelm humanity, Ethan Hawke is Edward, Chief Haematologist for a pharmaceutical company that has become the world’s leading supplier of blood products. His problems are twofold: first, the number of remaining humans is so low that the blood will soon run out, and all of his attempts to find a stable blood substitute have failed; second, he wishes he were still human. When he meets members of the human resistance, Edward will find a new purpose, perhaps influencing the fate of the entire vampire species.

Daybreakers intends its audience to consider the natural consequence of the vampire myth – a world in which vampires have overcome all opposition and become the dominant species. This seems a logical and inescapable scenario when one considers the powers attributed to the blood-suckers in vampire lore, and one wonders why there haven’t been more films that explore it. Its introductory sequences revel in this sense of ‘new-ness’. The world goes about its business as before, but only at night rather than in day. ‘Irish’ coffee is perhaps more likely to describe the origin of the blood it is laced with than suggest alcohol has been added. And corporations will adapt to their market and remain evil, manipulative and corrupt.

These early scenes (and the first of all, which has not been described here for the sake of potential viewers) clearly define this world and its rules, and are skilfully and evocatively produced. Life is bound by darkness and lit only by blue light – this is a stylish production. The set design and lighting are matched by creature effects courtesy of Weta Workshop, and, given its comparatively modest budget, the visual effects are adequate if not spectacular.

Daybreakers moves at a rather languid pace, allowing its audience to soak up the milieu its characters inhabit and consider the allegorical points the Spierig brothers seem hell-bent on making. Just like the recent film Avatar, there are numerous potential targets for political point-scoring, and the success with which the film hits those targets will be defined by the particular prejudices of its audience. There are times, however, when the film might have benefitted from being hurried along just a little.

Hawke is unremarkable in the lead role, perhaps uncertain as to why he is surrounded by unknown-to-American-audiences Australian (and occasionally New Zealand-born) actors sporting moderately successful American accents in a film funded by the Film Finance Corporation Australia (now Screen Australia) and shot in Australia by Australian writer/directors. He sparks up a little when compatriot Willem Dafoe arrives, but that is perhaps more likely a result of Dafoe threatening to steal the film away with his portrayal of Elvis. Claudia Karvan, Sam Neill and Vince Colosimo all suffer through underwritten roles, although at least Neill gets to have a little fun.

It does make one wonder why the Spierigs felt compelled to mask their film’s origins in such a way, although perhaps it is as simple as the size of the target audience. Daybreakers has taken just US$30 million since opening there on the 8th of January, however, which makes the film profitable (although marketing costs are unknown) but hardly a phenomenal success. 28 Days Later… on the other hand, made much more money in the US, while being a British film about British characters set in Britain. The 20th Anniversary 2007-2008 Annual Report for the FFC suggests its mission was to ‘strengthen a sense of Australian cultural identity’, and one wonders how a film such as Daybreakers contributes to its achievement of that mission.

Although the fact its ending relies on hitherto unsuspected magic is unfortunate, and similarities in both style and plot structure with The Matrix are inescapable, Daybreakers remains an atmospheric and enjoyable film that has the potential to become a cult favourite.

Daybreakers has been a long time coming (it was shot back in 2007) and I’d be lying if I said it wasn’t a little disappointing.

This is a film, however, that squeezes every last drop out of the vampire genre. There are so many good and original ideas on show here, even if you exclude the main premise. Several times I found myself thinking, “Why hasn’t that ever been done before?”

The performances are lacklustre, though I feel fault may lie with the Spierigs’ direction and screenplay. In contrast to Mark, I actually thought Ethan Hawke was the best actor on show here. It was a treat to see a vampire shocked and terrified at home invasion. 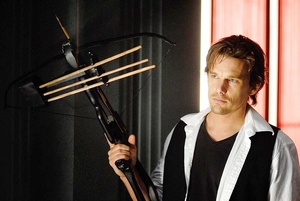 Others (Vince Colosimo, Jay Laga’aia, Claudia Karvan, Sam Neill) seem distracted or confused for the majority of the time. Most unsettling was the fact that Willem Dafoe was, well… not very good. This has got to be the first time I haven’t been impressed with his performance (his ‘Power Rangers’-style performance in the woefully overrated Spider-Man was better than this).

Even excusing the less-than-great direction, it’s the pacing and characterisation that lets down the most. The film feels sluggish, even if the ideas are interesting and the story is engaging. It’s a pity that the Spierigs’ cinematic rhythm hasn’t improved since Undead, which suffered from similar problems. There’s also the fact that our heroes have very little in the way of character arcs – there are no big moments for the unlucky bunch, or are least the ones there are fail to make the impact they should. In fact, Isobel Lucas probably puts in the most emotionally effective performance in a very small role (going to show yet again just how pointless an exercise Transformers: Revenge of the Fallen was for all involved. (But mainly the audience.))

Whilst it sounds like I’m condemning the film, I don’t mean to. It just goes to show how excited I’ve been about Daybreakers for the last three years or so. There are half a dozen fantastic moments – ones that show just how inventive the Spierigs are and how strange it is that Hollywood haven’t plonked them at the helm of a bit, fat juicy budget – the boys certainly get their money’s worth here. The cinematography, set design and special effects are all pretty good and the gory moments are fantastic.

This is a must see for lovers of vampire films (whilst it doesn’t come close to Let the Right One In (Låt den rätte komma in), it’s certainly better than 30 Days of Night), and a film that goes to show that Australians know how to make good genre films.