Any film that gets slapped with the label “Hitchcockian” is going to pique my interest. Not only is Hitchcock my favourite film director, but I love thrillers so much that I can tolerate borderline awful films with ease. Thankfully, Night Moves isn’t even close to awful. It does have its problems, however. 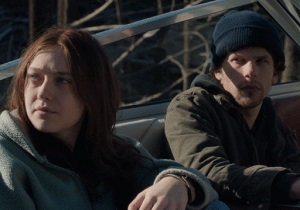 The plot sees a group of three eco-terrorists plotting to blow up a dam. Josh (Jesse Eisenberg), Dena (Dakota Fanning) and Harmon (Peter Sarsgaard) are a jaded bunch, wholly focussed on their singular aim. As the film opens, their plan is already in motion, and following them every step of the way serves to ratchet up the tension brilliantly. Like Hitchcock’s best works, the film puts the viewer on the edge of their seat, hoping that the protagonists won’t get caught. It matters little that the vast majority of us wouldn’t agree with their actions; we’re with them every step of the way, so we’re complicit. Of course we don’t want to get caught.

This is a slow burn thriller, but don’t be mistaken into thinking it’s too slow to maintain your attention. An interesting decision was made with Jeff Grace’s score, which is surprisingly languid. A greater emphasis on percussion (à la the work of Tykwer, Klimek and Heil) would have been my preference, though perhaps that would have been too conformist for writer/director Kelly Reichardt’s indie sensibilities.

Our trio of actors do a commendable job. Fanning is excellent as always, and Sarsgaard, ever the supporting character, puts in a good effort also. Eisenberg perhaps doesn’t truly excel, but only insofar as his character is frustratingly intangible. Josh starts out committed and more experienced than the younger Dena, but then, when the going gets tough, starts to waiver. A bit. His performance is a delicate balancing act, and is perhaps a little too subtle for the viewer.

The main problem with Night Moves is that all the good stuff is at the front end. The first half boasts a brilliant build-up of tension, but the second half leaves much less of an impact. It’s hard to argue with the suggestion that this is a realistic depiction of the events that transpire, but all the same I craved for some kind of climax or resounding resolution that never came. To return to Hitchcock, Night Moves, like The Birds, is a film that feels like its missing its final act. There’s a certain amount of unfulfilled potential here, but it’s a solid thriller.

Night Moves is released in Australia on 11 September 2014.