I didn’t know that Haemoo was based on a true story, so when the narrative suddenly turned dark (so very, very dark) I was caught unawares. What at first seems your average morality tale à la A Simple Plan or Treasure of the Sierra Madre is actually closer to a modern tragedy. 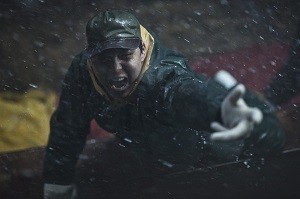 Haemoo (translated: sea fog) was selected as the South Korean entry in the 87th Academy Awards but failed to gain a nomination. Co-written and co-produced by the man behind Snowpiercer and The Host (Gwoemul), Bong Joon-ho, it’s set during the Asian financial crisis. A group of South Korean fisherman are struggling to make ends meet when, unbeknownst to them, their captain agrees to take on human cargo. Sneaking 25 Korean-Chinese immigrants on board, the crew has to get them back to South Korea whilst avoiding not only the maritime authorities but the tensions amongst the crew.

Thanks to a fantastic opening montage, we get a true sense of the type of lives the fishermen lead. They’re hardworking and loyal bunch, and they make the most of the rust bucket they call a boat. Once they turn their attention to people smuggling, however, the tone becomes equal parts melodramatic and gauche. The characters have very little depth, and it’s hard to understand why everyone turns on each other quite so quickly and viciously. It’s a tragic tale with a truly heart-stopping halfway mark (assuming you didn’t read about the true story on Wikipedia first) but from that point on, it teeters between hard-hitting drama and genre thriller.

The production values are impressive. The set design looks great (even if the engine room appears waaaay to large) and it feels like they’re really out at sea – something that’s obviously difficult to replicate on film. The cinematography is impressive also. The DVD presentation is sharp so the lack of Blu-ray release shouldn’t bother you.

If more of a conventional thriller like Contraband, Haemoo would have worked fine. As a hard-hitting piece of cinéma vérité, it would have similarly impressed. But the film is somewhere in between. Some dramatic moments feel forced, whilst other shocking beats really strike home. It’s a thought-provoking drama that doesn’t leave the viewer with the impression it could have.

Haemoo is available now on DVD from Madman.