When are the US Military gonna learn? Their experiments in nuclear and biological weapons are not only morally improper endeavours, but THEY CREATE MUTANT MONSTERS INTENT ON DESTROYING ALL. If it’s not Godzilla (Gojira), then it’s The Hills Have Eyes or any of a multiplicity of creatures feasting down on the human race. This time round it’s South Korea who have to deal with a kind of fish monster mutant thingy, though there’s more than a passing knock at the US’ use of weapons of mass destruction even before they decide to bring in ‘Agent Yellow'(!) 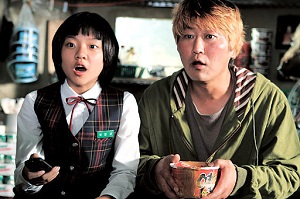 The Host is actually a cut above the average monster movie flick – the creature’s initial rampage is brilliant. The first act skilfully blends humour with horror, and that on its own is worth the price of admission, which is a good thing considering it goes downhill from there on. The second act becomes rather serious, and I don’t mean it ups the not-so-subtle political commentary that runs rampant throughout, but that it is overwhelmingly dull. There’s way too much to-ing and fro-ing as the characters effectively waste some time until the inevitable showdown. The third act is a knockout, though unfortunately only reiterates how disappointing the middle was.

The creature is great fun – utterly ridiculous yet somehow believable enough to keep us entertained. The cinematography is great, with some very cool action moments. The heroes of the film are the Park family, who band together in an effort to stop the creature, and their wackiness is instantly appealing. There are very few films that could pull off a humorous moment of grief at a mass funeral.

The catalyst of this mutant disaster is apparently based on real events, whereby a US military employee ordered formaldehyde to be dumped down the drain, and in this light the rather overbearing political context is arguably justified. I’m sure this flick will be remade by Hollywood soon, though they may slightly alter the premise. Hell, they may even insert Raymond Burr into the film.

←Talladega Nights: The Ballad of Ricky Bobby The Wind That Shakes the Barley→