Jalmari Helander’s follow-up to his cult hit Rare Exports: A Christmas Tale is a slice of big dumb fun that’s had a rough response online, going by its IMDb rating. 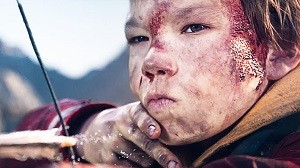 The film stars Samuel L. Jackson as the US President. A man who’s never done a day of hard labour in his life, the President doesn’t stand a chance when Air Force One goes down in the Finnish mountains. (Apparently Finland doesn’t have mountains to speak of, but we’ll just suspend our disbelief, shall we?) Thankfully the President runs into Oskari (Onni Tommila), a 13 year old boy who’s been sent into the wilderness to follow in his father’s footsteps and prove himself a peerless big game hunter.

If you’re after some loud, silly entertainment, this this is it. Helander brings the same big screen ambitions to this feature as he did with Rare Exports, except he has a lot of jaw-dropping scenery to show off. I would have said that he had a lot of money to play around with too, however it seems the budget was under US $10 million, which is astounding when you see the stuff thrown up the screen.

Jackson has a good time, never over-selling his scenes, whilst Tommila plays Oskari as deadly serious, barely cracking a smile. The entire film has a kind of Cliffhanger meets Son of Rambow sensibility, and it’s hard to be too critical of a story that moves so swiftly and with such confidence, no matter how ridiculous.

Ray Stevenson plays the bodyguard to the President, Morris, with the same conviction he brings to any role. Whilst he might have a solid career, being involved in both the Marvel Cinematic Universe and the Divergent franchise, it always feels like he’s missed out on a truly great role. Victor Garber plays the Vice President with aplomb whilst Jim Broadbent is excellent in a small role as a former CIA field agent, Herbert.

Like I said, the film looks fantastic, whilst the sound design will certainly give your subwoofer a workout. Be prepared to annoy the neighbours every time another explosion hits. The Blu-ray features a super-short behind the scenes snippet which is decent enough, as well as some atrociously dull interviews with the cast and crew. You know the ones, where the people on camera are asked one at a time to explain the story, explain how they got the role, and explain who they think will enjoy the film.

Big Game doesn’t outstay its welcome, and the script includes some genuinely sweet moments. It’s silly, and the initially impressive visual effects get worse as the narrative plays out. But overall, this is a fun film that has a lot in common with Rare Exports.

Big Game is available now on DVD from Madman.

←Haemoo Sleeping With Other People→