Baltasar Kormákur directs a remake of an Icelandic film he previously starred in and produced, Reykjavik-Rotterdam. The Wahlberg-starring Contraband is a solid thriller/heist movie that, whilst never brilliant, is perfectly acceptable on most fronts. 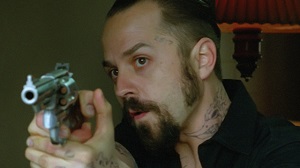 Ex-smuggler Chris Farraday (Wahlberg) has been on the straight and narrow for some years now, having settled down with his wife Kate (Kate Beckinsale) and two kids. When Kate’s brother, Andy (Caleb Landry Jones), gets into trouble with a drug boss (Giovanni Ribisi), it’s up to Chris to pull off one last job in an attempt to pay off the boy’s debts.

Like many films of its ilk, Contraband goes to great lengths to make the central character likeable. First off, he’s already left behind his life of crime, and only jumps back in an attempt to help a family member. Second, he has one particularly important rule: he doesn’t smuggle drugs. This of course means that Chris is one of those nice criminals that we can sympathise with. In that sense, Wahlberg is perfectly cast. Whilst he doesn’t have enormous range as an actor, he can play both alpha dog and sensitive guy at the same time. As usual, he does a good job here.

He’s surrounded by a huge array of recognisable names who never quite made the A-list. As well as Ribisi, we also have Lukas Haas, Ben Foster and J. K. Simmons. Beckinsale has perhaps the most thankless task as wife and/or victim, and holding the performance up against her work in the Underworld films makes for a strange juxtaposition indeed.

Contraband moves along at a cracking pace, and at times feels as if certain scenes were pared down to their expositional essentials. This means the film never becomes sluggish, but at the same time feels as if such moments are for the audience’s benefit only, rather than part of the organic narrative. There are a couple of standout set pieces, the best of which admittedly feels like it may have been added at the last moment, but all in all the film keeps to a strict against-the-clock mentality.

It’s good to see an old-fashioned heist film. I never thought I’d get sick of super-powered comic book movies, but 2011 certainly pushed my patience to the edge. I’ve been recently yearning for the days of the early 90s, where the thriller reigned supreme in Hollywood. Here’s hoping we see more films in that somewhat forgotten genre soon.