So I might as well save y’all some time: yes, Gravity is as good as everyone says.

It’s been a long wait between drinks for Alfonso Cuarón (you know, if feature films were ‘drinks’) considering that Children of Men was back in 2006, but you can rest assured that it was worth the wait. Gravity sees astronauts Ryan Stone (Sandra Bullock) and Matt Kowalski (George Clooney) on a routine spacewalk when something goes horribly, horribly wrong. Before you can say, “Was it the door?”, the prospect of dying alone in the silent vacuum of space becomes a horrible possibility for our two heroes. 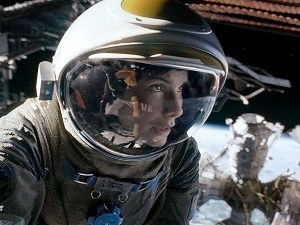 It’s like a version of Apollo 13 where you don’t know the ending; that’s really all you need know about the plot. Suffice to say that this is the very definition of edge-of-your-seat entertainment, and there’s not a second wasted during the brisk 91 minute running time. Clooney plays…well, Clooney. But it’s hard not to like the man. Bullock, however, is on top form, and if you didn’t think her turn in The Blind Side was worthy of an Oscar, this may be more your style.

A masterpiece of filmmaking, the entire film comprises very few shots. I didn’t count, but I would have thought the shot count could be as low as 25, and there are a number of super-long vertiginous shots that have the camera moving in impressively impossible ways. Of course, none of this would be possible if not for the stunning visual effects work. I can safely say that Gravity presents us with the best possible effects available in 2013. There are a couple of moments where it feels like you’re watching floating heads on CGI spacesuits (though nowhere near as bad as the same moments in Green Lantern) and I can’t promise that the film won’t look shonky in 30 years’ time, but as it stands now, Gravity is a marvellous achievement in visual effects.

This film was so good, so engrossing, so impressive, that the couple of moments where it fumbled really stood out. One involved Bullock getting her kit off, which was a little gauche, considering how similar it looked to Jane Fonda’s striptease in Barbarella 45 years ago. The moment really took me out of the film. The other problem simply concerned the stereotypical nature of the two characters, who fall into pretty traditional gender categories.

It may seem like nit-picking, but Gravity is so close to perfect that it’s frustrating. Nevertheless, ‘almost perfect’ should still sound like decent viewing to most people. I saw the 2D version but by all accounts the 3D version is excellent. Gravity is definitely the must-see film of 2013.

Alfonso Cuaron’s previous film was the stellar Children of Men, one of my favourite films of 2006. The seven years since then have been a long wait for fans and has allowed plenty of time for expectation to build. That Gravity is the wondrous example of filmmaking that it is comes as a huge relief. Finally, after so much US Summer dross here is a blockbuster to get excited about!

While on a routine spacewalk outside space shuttle Explorer, Mission Specialist Dr Ryan Stone and Mission Commander Matt Kowalski find themselves at opposite ends of the experience spectrum. For Kowalski this is his final trip to space after a long and illustrious career, while for Stone this is her first trip and she is still adjusting to the effects of weightlessness. When disaster strikes these two unlikely partners will be caught in a race against time with only each other to rely upon.

I cannot wait to see Gravity again, and that is something that this weary film-lover doesn’t say that often. 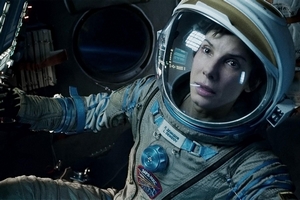 Cuaron’s film is the perfect mix of tension, thrills, disaster and excitement, and he modulates the sensations like he is conducting a symphony. Every moment of his film demonstrates his craft, and that of his performers. Gravity is paced to perfection, with no redundancy, no flab, but no errant haste either. The film is close to perfect.

Bullock gives what might be her best performance on film while Clooney never really needs to stretch his legs, perhaps one of only two minor flaws. This guy can do ‘charming authority figure’ in his sleep, and only gets a few brief moments to deliver a little more depth – and that only as a disembodied voice on intercom. Bullock gets the best of it here, however, being gifted a character with texture and being asked to play her from within a spacesuit for much of the running time of the film. This shelters her from too much scrutiny of her performance while allowing her audience to feel for her character and not get distracted by how annoying Bullock can be.

The other of the two (only two!) minor flaws in Gravity is potentially not even a flaw for most of the audience at all: the requirement to suspend disbelief at the convenience of events. No, we’re not talking at quite the same scale as the finding of Spock in J.J. Abram’s Star Trek, but there are elements of the plot that are absolutely necessary to make the film work, but don’t quite stand up to prolonged scrutiny. This has been noted by others, so I won’t spoil the fun for anyone else.

Cuaron has crafted this film with incredible attention to detail, with every shot considered and then displayed to maximum effect, sensible and restrained use of special effects, and probably the definitive use of sound in a film set in space. There are several moments where his visual imagery almost crosses over into the thematically overblown, but the guy isn’t Michael Bay and the fact that he has even thought through why he is showing that shot in the way he has chosen means I’m prepared to give him the benefit of the doubt and just enjoy it for what it is.

Gravity is fantastic enough to restore one’s faith in the potential of great film, while being a thrill-a-minute ride that never lets up until its perfectly timed denouement. Brilliant filmmaking. See it.