I thoroughly enjoyed the first and second instalments in this Evangelion ‘rebuild’. Whilst the reasoning behind the project itself was kind of lost of me – why bother remaking the show at all? – by the time Evangelion 2.22: You Can (Not) Advance shifted into high gear, I was well and truly sold. Alas, this third instalment is a disastrous fumble, as the plot becomes almost completely incomprehensible. 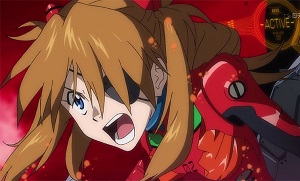 I saw this film with a ‘Neon Genesis: Evangelion’ expert, and even she was lost. Where the first and second films were effectively compressed versions of episodes from the TV show, Evangelion 3.0 is something else entirely. As I understand it, this is a strange alternate take on the story contained in The End of Evangelion movie that finished off the original TV show. Well, sort of. It also goes off on a completely new tangent, such that it’s hard to know whether this is supposed to be a remake, a re-imagining or a companion piece to The End of Evangelion.

The film opens in a stunningly disorienting fashion and stays that way for most of the running time. Set 14 years after the end of You Can (Not) Advance, the world is now a ruined wasteland. Characters are older, have switched allegiances and are determined to stop NERV, who they see as responsible for the downfall of humanity. Shinji (Megumi Ogata) finds himself thrust into this new world, with – much like us viewers – very little idea as to what’s going on and why everyone’s treating him differently. Shinji unfortunately continues down the path of becoming more and more annoying. He constantly acts on impulse, then shouts and cries a lot when things don’t go his way. By this third film, it’s hard to feel for a guy who continues to make bad choices on the spur of the moment.

The film really is a mess. The visuals are abstract in the extreme, the dialogue is confusing and the narrative is awkwardly paced. It just feels like extra episodes in a TV show, rather than a feature film.

Technically, this is a work of art. The animation is beautiful and fluid, the 3D animation perfectly complementing the old school 2D art. The music is fantastic and the action is thrilling. This is all for nought, however, when you take into consideration the fact that you have no idea what the hell is going on.

I realise that the original TV series shocked viewers back in the day by becoming more than just a ‘mechs versus kaiju’ story, but this film serves only to confuse those who were already confused by what happened in The End of Evangelion. More importantly, the film refuses to let the viewer in. I simply couldn’t get emotionally invested in this film; instead I simply sat there, passively watching the (admittedly very pretty) colour and movement. This is required viewing only for the most devout Evangelion fan.

Evangelion 3.0: You Can (Not) Redo is currently showing at Reel Anime.