Never let it be said that Alfonso Cuarón is predictable. He’s directed the Gwenyth Paltrow remake of Great Expectations, the sexy Y tu mamá también that unleashed Gael Garcia Bernal on the general public, what many consider to be the best Harry Potter movie – The Prisoner of Azkaban, and now Children of Men. Sharing more than a little in common with V For Vendetta, Children of Men is a dystopic vision that has seen the world tumble into chaos, with totalitarian laws hanging over the population’s every move. The dingy rundown streets are nothing compared to the ‘fugee’ camps, where all those without English citizenship are herded like animals. The catalyst of this future was an epidemic that rendered humans barren – there have been no babies for 18 years. 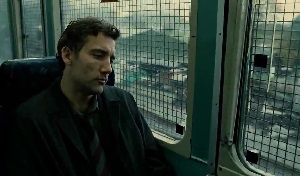 The focus of the film (based on a book by P.D. James) is Theodore Faron, a man that has chosen the safer option and holds a steady job doing what he’s told whilst the world crumbles around him. After way too many films featuring a bland, stoic Clive Owen (Sin City, Inside Man) he finally gets a role with depth in Children of Men. Faron is both conflicted and determined, and not once do we feel that he is in control of his circumstances. The brilliant Chiwetel Ejiofor plays rebel Luke, under the command of Julian Taylor (Julianne Moore). The cast also includes ex-political cartoonist and hippie Jasper (Michael Caine), who brings a much-needed human element to the film.

The action scenes are stunning. Nothing in recent memory can compare with the power and realism of the war-torn future depicted here. There are a number of ridiculously long single steadycam shots, following characters inside and outside buildings, through gunfights and into vehicles. Such moments are truly unmatched by any war film I can remember. There is an intelligent use of special effects, also – rather than plopping all the actors in front of a greenscreen they instead shoot on location or in large-scale sets, with minute CGI alterations. George Lucas could learn from this film.

As with V For Vendetta and a number of science fiction films of late, Children of Men has more than a passing jab at the current political climate. Government slogans are pasted everywhere, encouraging citizens to be untrusting of their neighbours, and to report any ‘suspicious’ behaviour. The refugee camps will of course resonate with many Australians who will recognise the (however exaggerated) similarities to our detention centres. In a West that switches morals for money and freedom for security, the best that can be said is that there’s certainly a lot to inspire dystopian science fiction.

Children of Men is a fairly single-minded affair – once it gets going the narrative drive is simple and unrelenting. There is a lot left unexplained also, particularly the intentions of the various parties vying for the very important refugee Kee (Claire-Hope Ashitey), but for all its simplicity it remains a very powerful film.

Based on the novel by P.D. James, and featuring a storyline firmly rooted in our modern world, Children of Men is a brilliantly realised vision of the near future that is both thrilling and moving.

Similar in outlook to V For Vendetta, but more clearly deriving its visual style from war movies like Saving Private Ryan, Children of Men shows us exactly what a world without hope would be like. 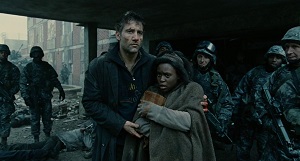 People trudge to their work or homes, there is very little joy, and advertisements for home suicide kits are more prominent than those for consumer items. Immigrants are herded into ghettos of appalling conditions, and a violent rebel class has emerged. Seemingly comfortable in a lifestyle designed to attract as little attention as possible, Theo (Clive Owen) is only prodded out of this comfort zone by the re-emergence of hope.

A film such as Children of Men succeeds mainly on the strength of the performance of its lead, and Clive Owen is perfect as the reluctant Theo. He is believably disconcerted by the events that engulf him, and his transformation into leader/hero is intelligently handled. Led by Owen who is a true star in this role, the cast is brilliant; Julianne Moore is wonderful as the catalyst for Theo’s awakening, and Chiwetel Ejiofor continues to be exceptional in everything he does. Michael Caine is slightly odd as Theo’s friend Jasper, but the remaining group of relatively unknown actors all perform admirably – Claire-Hope Ashitey is particularly impressive.

The real star, however, is Alfonso Cuarón, whose direction is spot on. He knows just how much to give and when to withold, and his choices – in particular how much of the population’s problem to explain and how much to ask the audience to simply accept – allow the focus to remain clearly on Theo instead of how this future came about.

In addition, Cuarón has produced several incredible action pieces, which are absolutely enthralling and completely immersive. Featuring prolonged shots with handheld cameras, and a stunningly realistic ‘warzone’ setting, these sequences are lessons in the production of life-like dramatic action.

While Children of Men is generally very impressive, the plot is quite linear once the initial character introductions are made, and perhaps may have been stronger with one more change in direction. Otherwise, the direction, cinematography and performances are all first rate, and the final result is a film that is both exciting and intriguing.