The remake of the television series, ‘Neon Genesis: Evangelion’ continues with Evangelion 2.22: You Can (Not) Advance, and the series shifts into high gear with this infinitely superior sequel. 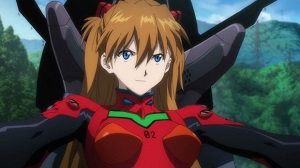 People may remember that, whilst I enjoyed Evangelion 1.0 You Are (Not) Alone, it confused the hell out of me and seemed to be created simply for fans of the TV show. With 2.22, confusion still abounds, though the plot becomes much more tangible. We learn more about the Second Impact, why the sea is red and some of Misato’s backstory. More importantly, with the introduction of new characters, we start to understand more about Shinji and why he’s… well, a bit of a whinger.

The new faces that impress the most are EVA pilots Asuka Langley and Mari Illustrious Makinami. The German/Japanese Asuka is a breath of fresh air after the softly spoken Rei and Shinji – here’s a girl who LOVES to pilot EVAs and isn’t afraid to speak her mind. Mari, meanwhile, is rather strange but a kick-arse pilot. The variation among the kids makes for a much more colourful narrative, and this film ends up being a lot funnier than the first. Whilst the running time is longer, the film felt like it moved a lot quicker than the previous instalment.

The action is stunning. There are some really remarkable sequences, and the Angels that make an appearance this time around are of the more abstract variety, which is great. In my view, the less the Angels look like Robeasts from ‘Lion Force Volton’, the better. The film blends 3D graphics with traditional 2D animation perfectly, and there are some images that are spectacular to behold.

You may notice that the title of the film is slightly different from the cinema release, being 2.22 instead of 2.0. As I understand it, this means this Blu-Ray release features some added/re-edited footage, though as I didn’t catch it at the cinema, I couldn’t tell you the nature of the changes. (I’ve seen both 1.0 and 1.11, and I didn’t notice the difference with those, to be honest). The Blu-Ray transfer is second to none, and this time around we get yellow subtitles, which is appreciated (though the usual problems with white subtitles don’t seem to be an issue on HD, especially if the text has a drop-shadow). As per my anime-watching habits, I’m sorry to inform you that I didn’t bother listening to the English dub – I’m sure it gets the job done, but I’ve never heard an English dub that outdoes the original Japanese voice acting.

If You Are (Not) Alone piqued your interest but failed to impress, I recommend giving You Can (Not) Advance a spin, because the franchise really takes off. Whilst full comprehension of the plot is still just out of reach, this is a thrilling instalment and I can’t wait for the next.

Evangelion 2.22: You Can (Not) Advance is out now on Blu-Ray via Madman.