I must admit I haven’t seen a Woody Allen film since Scoop back in 2006, but aside from a brief diversion in the form of Match Point, you pretty much know what you’re going to get whenever you go into the cinema to watch one of his movies. Credits in Windsor typeface? Check. Music so old that it’s probably royalty-free? Check. Manic New Yorker going through a crisis? Check. 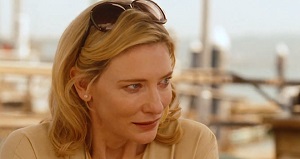 Thing is, this particular manic New Yorker is played by Cate Blanchett. Having just gone from riches to rags at the drop of a hat, Jasmine (Blanchett) has arrived in San Francisco to stay with/impose upon her sister, Ginger (Sally Hawkins). Forever critical of Ginger, Jasmine isn’t quite sure what she should be doing with her life now that her husband’s out of the picture.

The film flits between the present and the past, back when Jasmine and Hal (Alec Baldwin) were living in luxury. The non-linearity is confusing at first but the film soon settles into a rhythm. Unsurprisingly, Blanchett is the true star of the show here. Her performance is exquisitely unhinged, playing Jasmine as if she’s forever dancing on the edge of the abyss. Put this next to the serene yet authoritative Galadriel from The Lord of the Rings and you’d be hard placed to recognise the same woman.

As far as this compares with Allen’s previous films, I’d class this as middling to great. It mightn’t hit the heights of Manhattan but not as bad as the likes of Hollywood Ending. The last of his films to truly leave a lasting impression was Match Point, and that was because it was such a departure from his usual shtick (though had echoes of Crimes and Misdemeanours.) The only departure here is that the film only spends a third of its running time in New York, though since his most recent movies have seen his scripts relocated to Europe, this isn’t that big a change, I guess.

If you’re the kind of person that enjoys Woody Allen writing and directing the typical Woody Allen stuff, then Blue Jasmine’s for you.