Neill Blomkamp’s District 9 knocked the ball well and truly out of the park. I wasn’t singing its praises quite as loudly as others, yet even I was stunned by its bold and surprising nature. Never mind the fact that it did amazing things with very little money; the storytelling on show was a brilliant amalgam of documentary realism meets sci-fi action artifice. 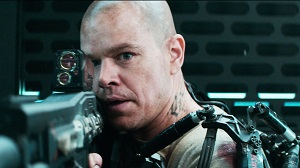 With Blomkamp’s follow up, Elysium, we have a far more mundane piece of storytelling. The idea is similar to that of District 9, insofar as it has taken a known concept – the gap between rich and poor in the modern world – and extrapolated. Thus, the 1 percenters are living in orbit just above the Earth in a ring world known as Elysium. Whilst they have all the luxuries that a futuristic lifestyle can provide, the poor masses down below can’t even get decent medical treatment. The premise itself feels a little clunky, like a heavy-handed version of Gattaca, but it works. Unsurprisingly, the film is a visual feast, and the effects are fantastic (particularly the droids, who always look like they’re sharing the same physical space as the actors, no matter the impossibility of the actions they’re performing.)

Our central character is Max (Matt Damon), a factory worker who has dreamed of making his way to the fabled Elysium ever since he was a child. When tragedy strikes, this dream becomes a matter of life and death, and is the cue for the kind of madcap action that was so surprising in the latter half of District 9.

Except, of course, it isn’t surprising here, because the steady escalation that was handled so masterfully in Blomkamp’s first feature is conspicuously absent. Elysium is action-packed from the get-go. In fact the first 20 minutes feel like they’ve been whittled down to the bone, as if the filmmakers were in a hurry to get to the good stuff. This means we don’t get to appreciate Max’s humdrum existence before the stakes are raised and he’s doing his best to ‘splode people before they kill him.

And ‘splode they do. There are many flashes of gore that are both shocking and a good example of visual and practical effects working in harmony. The action is impressive also, and the film never pauses for breath, which is Elysium’s main problem.

At the end of the day, this is a movie populated by characters that are incredibly cartoonish. That Sharlto Copley plays a samurai sword-wielding psychopath by the name of Kruger isn’t an issue, but Jodie Foster’s Delacourt comes across as way too Cruella de Vil for my liking. There isn’t any depth to anyone, so it’s hard to care about what’s at stake. More importantly perhaps, the screenplay contains a hell of a lot of narrative conveniences; too many coincidences, too many quick fixes.

Elysium is disappointing to say the least. Blomkamp is still an accomplished filmmaker but the screenplay simply isn’t up to scratch. Here’s hoping this is just a sophomore slump, and that the announced Chappie is better.