Adam Wingard’s You’re Next has finally arrived on the big screen after an extended delay. The film debuted at the 2011 Toronto Film Festival but for some reason Lionsgate only saw fit to release it now. After spotting some positive reviews online and catching glimpses of the classy-looking trailer, I had high hopes. 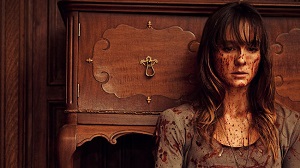 The premise is simple. The Davison family has gathered in their countryside mansion to celebrate the parents’ 35th wedding anniversary. In attendance are the siblings and their respective partners. They’ve barely sat down for dinner when they’re attacked by a group of masked killers intent on taking them out one by one.

You’re Next oozes class. The cinematography and editing is excellent, as are the sets/locations and costumes. If you’re looking for a colourful feature however, then this isn’t for you. The entire film features little more than drab yellows and browns. Also, the score is inconsistent. Some tracks work well, whereas other moments rely on random loud noises to punctuate lazy scares.

The main flaw, however, is the infuriating screenplay. It’s equal parts intelligent and stupid – and I mean truly 50/50. One second you’ll find yourself impressed at the intelligent decisions made by the characters, next moments you’ll be gobsmacked by the idiocy of their actions. It’s truly a case of one step forward, one step back. There are huge plot holes and lapses in logic that constantly disrupt the flow of the film – early on people are avoiding windows for fear of being taken out sniper from outside, but minutes later they have no qualms with standing right in front of an open window; someone gets killed in a bedroom, but it takes ten minutes for anyone to realise that the killer could still be hiding somewhere in the house. And the list goes on.

Early on, the film makes an effort to provide some character depth, but it’s all thrown by the wayside as people begin to die in quick succession. There aren’t any character arcs to speak of. The violence is brutal and bloody, but only feels gratuitous towards the end.
Sharni Vinson excels in the lead role as Erin, whilst AJ Bowen and Joe Swanberg have a lot of fun as bickering brothers, Crispian and Drake. Ti West, director of the excellent horrors The House of the Devil and The Innkeepers, even has a small role as Tariq, boyfriend of Aimee (Amy Seimitz). Overall, the casting is good but there are a handful of moments that feel awkward – and it’s hard to know whether the script, the director or the performers are to blame.

You’re Next just creeps over the line into ‘worth a watch’ territory, but only if you’re a horror movie aficionado. There is a smattering of great ideas amongst a lot of silliness, but the film still remains a disappointment for me, and doesn’t come close to the similarly-themed The Strangers.