My overall impression of V/H/S/2 was one of slight disappointment. Even so, I’m incredibly excited by the success of these anthology horror films, and hope that we get to see a new instalment every year. The thing is, though few of the films in either compilation are that brilliant on their own, every single story has an ingenious hook that makes it stand out from the rest of the mass-produced, humdrum movies we see coming out of Hollywood most of the time. 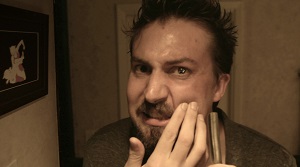 This time, we get four short films, plus the overarching film that acts as a framing device for the viewing of the mysterious videotapes. ‘Phase 1 Clinical Trials’ is directed by Adam Wingard, of You’re Next fame, and features a young man having issues with his bionic eye, whilst ‘A Ride in the Park’ is directed by The Blair Witch Project‘s Eduardo Sánchez and Gregg Hale, and sees a couple of hikers attacked by a zombie. Gareth Huw Evans and Timo Tjahjanto bring us easily the best of the lot, ‘Safe Haven’, which sees a news crew gaining exclusive access to a secretive Indonesian cult, and finally Hobo with a Shotgun‘s Jason Eisener directs ‘Slumber Party’, a chaotic fever dream featuring aliens and weird lights coming from a lake.

Frustratingly, the film that acts as the framing device, ‘Tape 49’, is only a smidge more interesting than ‘Tape 52’ from the first film. Rather than expand upon the concept and the narrative universe, it seems to close it off with half-hearted references to videotapes with mysterious powers, à la Ring (Ringu). It also features some rather generic characters doing all the frustrating things that people in horror movies have done for decades.

Of course, everything in V/H/S/2 is composed of found footage, so those who find handheld camerawork nausea-inducing should sit a long way from the screen. There were a couple of occasions where I had to look away – usually when the cameraman was running for his life – but for the most part I was fine.

The good news is that this sequel isn’t packed to the brim with male characters desperate to film females naked without their permission. That’s not to say that there aren’t any gratuitous boobs – there most certainly are – but at least it’s been dialled down a notch.

Evan’s ‘Safe Haven’ is the longest film and easily worth the price of admission. Whilst I wasn’t particularly taken with The Raid, he really excels here. This short film actually features distinguishable characters and narrative arcs, something missing from pretty much all of the films in this series – usually it’s just a case of ‘scary stuff happening to random people.’ ‘Safe Haven’ is an absolute must for horror fans.

If you enjoyed the variety and creativity on show in V/H/S, then you should check out this one. It’s a mixed bag, to be sure, but it does feature some genuinely scary, surprising and/or hilarious moments.