District 9 is a fantastic film and one that shocks and surprises in just about every department. The less you know about the story the better, but I’ll reveal as much as the original teaser does: aliens arrived in the city of Johannesburg some time ago. Instead of being welcomed by humans, they have been herded into a slum known as District 9. With their spirits crushed and facing hatred from all sides, the subjugated alien population lives out a dreadful existence, struggling to survive from day to day.

It’s been some time since science fiction has been so… in your face. That the film is set in South Africa has obvious links to recent history, and when you consider that all of the aliens have been numbered and catalogued we see that the film is particularly damning of the human race in general. It’s either a wake up call – suggesting that our moral standards require constant vigilance – or a depressing condemnation of human nature.

Science fiction is predominantly concerned with humans entering the dominion of the gods (Prometheus, fire, yada yada yada… ) and as such questions what makes us human. This is exactly what District 9 is about. Effectively based on Blomkamp’s short film ‘Alive in Joburg’, it’s a tragedy/horror/action film hybrid. The steady escalation of events is masterfully handled and I assure you that by the ten minute mark you’ll have absolutely no idea how it’s going to end (which is quite a rarity, really).

That the film is so immersed in Johannesburg makes it a fascinating watch. Unlike any other alien invasion movie, we have no idea what the President of the United States thinks, because he’s entirely irrelevant. This is about the people on the ground, the inhabitants that have had their world shaken since the aliens arrived. There’s some fantastic acting, the main focus coming from Sharlto Copley as Wikus, a most unlikely lead character.

The special effects are fantastic and with a budget almost one sixth of G.I. Joe: The Rise of Cobra, it goes to show how a bunch of dropkicks were in charge of that ill-conceived toy commercial. It comes as no surprise that Peter Jackson has supported this film and Blomkamp almost every step of the way – he’s a major talent, and – incredibly – only 30. (Surely the powers that be will be letting his ill-fated ‘Halo’ adaptation go ahead, now… ) Sure, there are some weak moments, not to mention some biggish plot holes/unanswered questions, and I’m uncertain if the first act will be quite as involving on repeat viewings, but this is truly a film to be reckoned with.

If you’re only going to see one science fiction film this year, see District 9.

It is rare for a film to succeed so completely at immersing its audience in the world of its invention, and yet this is what first-time filmmaker Neill Blomkamp has achieved with District 9. A wholly remarkable and utterly wonderful film, it is a shame that it won’t be seen as widely as it deserves to be on account of being from the science fiction genre. For those of you that do see it, however, you’re in for a treat.

In a first few minutes that is rivalled in recent times only by the wonderful introductory sequences in Children of Men and, particularly, Serenity, we are informed via a collection of video clips from varying sources that an alien ship arrived in the skies above Johannesburg in 1982 and has hovered there ever since. 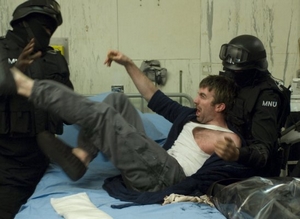 Its inhabitants have been camped in ‘District 9’, which has subsequently become a walled-off and progressively less law-abiding slum. When Wikus Van De Merwe (Sharlto Copley) is given the task of administering the expatriation of the millions of aliens to another camp several hundred kilometres from the city and its increasingly antagonistic human inhabitants, he will wade into a situation he thinks he understands but will find the reality is very much different from his expectations.

The aforementioned introduction is superb – a mockumentary with a collection of interviews from Van De Merwe at the time of the initial events and subsequently from academics and family. Seamlessly woven together to form an explanation for the audience of the alien arrival and all that has occurred since, this sequence is organised and concise, and yet also manages to provide enough background to allow what follows to make sense.

The breakneck pacing of the film never allows the audience to relax for more than a moment, with catastrophy and heroism blended with allegory and satire to allow an exceptionally satisfying film to emerge. That in its later stages it becomes a more traditional action-based science fiction film is not a problem – District 9 excels in this department as well, becoming one of the better of the genre in recent memory.

The lead performance by Sharlto Copley is wonderful, with a perfect blend of smug self-righteousness in the initial sequences allowed to turn naturally to incomprehension and terror. Copley manages to ensure the audience is behind his interpretation of Van De Merwe, in spite of the off-handed mistreatment he doles out, and the growth of the character throughout the film is a testament to his skill.

In support of Copley, the production crew have done an incredible job of making both District 9 and its inhabitants believable. Although it was made for an estimated $30 million, the look of the film and its rather astonishing visual and creature effects and make-up mean there is not a single moment when the audience is distracted from the reality of what they are witnessing. That Peter Jackson and the Weta Workshop team are behind this is no surprise – this is yet another example of the world-leading work they do in Wellington, New Zealand.

←Public Enemies Chronicle of a Kidnap→