Since the Blood-C TV series turned out to be one of the cleverest, most shocking yet satisfying anime shows yet, I was desperate to see The Last Dark. After blowing my mind with the sheer audacity of the revelations at the series’ cliff-hanger ending, I was keen to see where the part human, part monster Saya would go next. 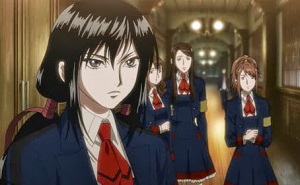 After a chilling opening typical of the various Blood properties, The Last Dark doesn’t waste any time getting to the meat of the narrative. Saya (Nana Mizuki) is out for revenge after tracking her tormentors to Tokyo. The government has enacted the Youth Ordinance Bill, which imposes all sorts of restrictions on young people, including an after-dark curfew. Saya stumbles across Surat, an underground resistance group made up of the young people whose freedoms the Ordinance Bill was designed to curtail. It seems they have an enemy in common: the Tower. Together, they set out to bring the organisation to its knees.

To be honest, this doesn’t feel like a straight continuation of Blood-C. Since that series was such a diversion from the original set-up of Blood: The Last Vampire, this tone is more similar to Saya’s original outing. It’s also incredibly simple. Saya is out for blood, there are Elder Bairns and Tower soldiers in her way, she pulls out her katana and that’s that. Even the character designs seem less striking than the work Clamp did for Blood-C.

The new characters are quite entertaining. Shun (Yūki Kaji) and Iori (Yūichi Nakamura) make a great comedic team, the former childish whilst the latter seems useless at anything other than crashing his car. Hiro (Kana Hanazawa) is a 13 year old wunderkind hacker who is so skilled she can touch type with her toes whilst Mana is a softly spoken 17 year old who indulges in a bit of hero worship with regards to Saya.

The animation is beautiful, with some nifty 3D animation thrown in. The vehicles in particular make great use of wireframe graphics and the action scenes are as brilliant as we’ve come to expect from anything featuring the Blood moniker. The Blu-ray presentation is top notch, and the extras include the NoNeNoNe shorts that serve as a study guide/catch up if you’ve forgotten all the details from the TV series.

At the end of the day however, The Last Dark is nothing more than decent. The pacing, action and story gets the job done, but there aren’t any huge surprises, and gone is the unexpectedly mystifying tone of the TV series. If you found Blood-C a little too weird for your tastes, then you will prefer this film, which is tonally much more in line with Blood: The Last Vampire. If, like me, you couldn’t get enough of Blood-C‘s uniqueness, then this might be a bit of a letdown.

Blood-C:The Last Dark is available now on Blu-ray and DVD from Madman.