It’s a pity that All is Lost’s release comes hot on the heels of Gravity, as the much flashier latter will no doubt overshadow the former. It has to be said that this is a very similar film to Alfonso Cuarón’s near-masterpiece, but that doesn’t mean you should skip it. 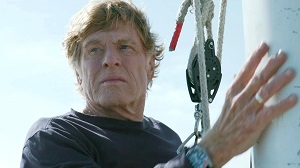 Here, Robert Redford plays a man sailing alone on the Indian Ocean when the hull of his yacht is breached. From that point on, things go from bad to worse. There really isn’t much else to add, and the primal simplicity of the narrative works wonders. At a guess, the script probably involved fewer than two pages of dialogue, and most of that comes from a voiceover in the first few moments of the film that feels tacked-on, perhaps after test screenings. (It’s over in an instant but, nevertheless, this superfluous narration is a pity.)

Redford is great as the single character, and I can only imagine what a ridiculously arduous physical shoot this must have been. Sure, there are obvious stunt double moments but for the most part, he climbs, swims, jumps and well, flails for much of the running time. It’s a brilliantly restrained and subtle performance, however, and it’s important to note he doesn’t have the help – and/or hindrance – of having to talk to himself as Sandra Bullock did in Gravity.

The budget in All is Lost feels as if it was stretched rather thin. There are a couple of scenes that appear to involve green screen or some such, but this isn’t enough to break immersion. The film otherwise looks great, and the only real letdown is Alex Ebert’s score, which consistently struck the wrong tone for me.

I shouldn’t keep mentioning Gravity, but similarities are so glaring that perhaps this should have been called Buoyancy. This synchronicity is akin to the duel releases of Volcano/Dante’s Peak and Armageddon/Deep Impact, though of course it’s most likely that this parallel conception is a simple coincidence and/or similar reading of the mood of the times.

As a simple, raw tale of man versus nature, All is Lost is fantastic. The lack of dialogue means that it has broad appeal, from children to adults, and to non-English speaking countries around the world.